Yesterday, The Palestinian Popular Resistance Committee of Nabi Saleh called for a demonstration at 3pm against a siege enforced on their village by Israeli forces. The demonstration was an overwhelming success with the re-opening of the checkpoint and a withdrawal of the additional forces deployed in the area by the Israeli military. 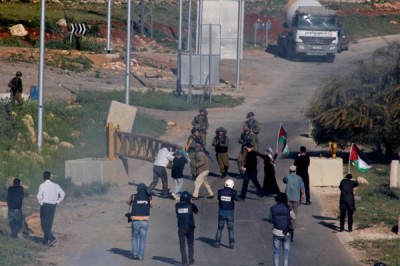 Mohammed Tamimi, the media officer for the village’s Popular Resistance declared that this was: “The first truly successful demonstration in Nabi Saleh”. He went on to say that “others villages should think about this and how to act towards closed checkpoints in the future.” Palestinian activists, internationals, and ISM activists responded to the protest call out, and joined the villagers themselves.

Internationals traveling to Nabi Saleh reported the presence of many “flying” checkpoints on route from Ramallah. These were deployed in an attempt to prevent people from outside the village joining the protest. Nonetheless the demonstration did take place and was well attended with approximately 50 people beginning to march from the middle of the village down to the checkpoint.

The Israeli army began to shoot tear gas canisters and throw stun grenades as soon as the demonstrators reached the main road. Despite this, the demonstration arrived at the checkpoint and refused to move until the road was opened, and the siege lifted.  While people were peacefully demonstrating in front of the barrier, the Israeli army used a large quantity of stun grenades, however after approximately one hour the army agreed to withdraw and open the checkpoint. In addition to this, the western checkpoint, which had been closed since 2002, was also re-opened adding to the already hugely successful day.

The siege itself began on April the 12th when a large number of Israeli forces closed all entrances to the village of Nabi Saleh with roadblocks, and declared the village a Closed Military Zone. The village was in this state for three days until this afternoon’s action. During the siege, workers and students have been unable to go to work or school. The Israeli army also employed brutal tactics against the villagers themselves over the last few days. One Palestinian man was shot in the face with live ammunition, though after surgery was described as being in a stable condition. Additionally, a Palestinian woman sustained various fractures and heavy bruising after being assaulted by soldiers whilst being detained with her child for three hours. Israeli forces threw stun grenades at cars attempting to approach the checkpoint throughout the siege.

It is believed the military began this illegal action due to the demonstrations at Nabi Saleh that have occurred every Friday since 2009. These demonstrations take place to protest against the theft of a water spring, and village land by the nearby illegal settlement of Halamish.

One Palestinian man was arrested during the demonstration today but after negotiations the village secured his release at 9.30 PM. The Popular Resistance Committee from the village has promised that should the Israeli military close the checkpoint again, they will call another protest immediately. In the meantime demonstrations will continue every Friday. 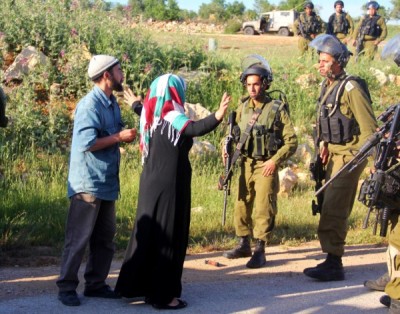 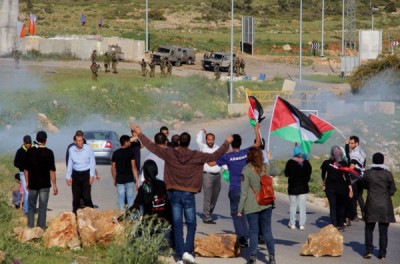