On April 11 an international volunteer was attacked and injured by Israeli army, while coming back from accompanying Palestinian shepherds near Susiya.

The Palestinian village of Susiya is surrounded by the Israeli settlement of Suseya, the outpost of Suseya’s Ancient Synagogue and the military base of Suseya North, where the Palestinian shepherds were nearby grazing. The Palestinian inhabitants of Susiya are struggling through the nonviolent popular resistance in order to gain the right to access their own lands and to live a dignified life.

At 14:10 pm, two international volunteers were leaving the place after having accompanied four Palestinian shepherds to graze on their own lands. They had just got in the stopped car on the street that connects Susiya and Yatta (where two other internationals were waiting for them), when two Israeli soldiers arrived from the military base and intimated them to get out from the car.

While the group was standing near the street, two army vehicles approached. As soon as the second vehicle arrived, the soldiers got immediately out from the jeep. The commander and four more soldiers physically blocked one international and tried to grab his camera, to handcuff him and to put him into the jeep, tugging at him and beating him. In the meanwhile other soldiers blocked the other volunteers, preventing them from taping as best the aggression that lasted for 13 minutes.

Because of the attack, the international volunteer was injured. He had a bleeding wound on his elbow and he received a hard blow on the lower abdomen, whereby the intervention of the ambulance was needed. The soldiers also tried to block the doctors to prevent the injured to get into the ambulance, until the Israeli Police came and gave the permission to leave.

The volunteer attacked was hospitalized in Yatta and the other three were detained in Kiryat Arba Police station and released after five hours. The Police held all the videos of the incident to investigate on it and the three internationals were given expulsion orders from South Hebron Hills area for 14 to 16 days. 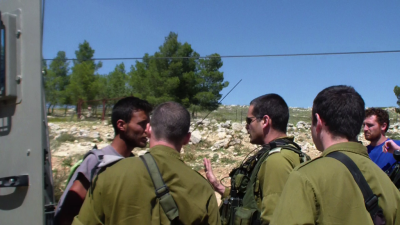 Operation Dove has maintained an international presence in At Tuwani and the South Hebron Hills since 2004.