An overview into the lives of Palestinian prisoners and their families

These prisoners are systematically transferred in most cases to prisons or facilities located within the current state of Israel, which is against the Convention (IV) relative to the Protection of Civilian Persons in Time of War (Article 76. Geneva, 12 August 1949). The Israeli state has ratified this Convention and is therefore bound by its obligations.

Palestinian Authorities attempted to access this Convention in 1989, but the ambiguity of Palestine’s status in the international community has hampered the protection of its population by international law. As part of mobilisations that have taken place these days, both internationally and in Palestine, it is always worth taking some time to get to know the stories behind the statistics.

Arrested: 26th December 2001. Has been in prison three times, the first time when he was 17 years old.

Sentence: His current prison sentence is 1 year and 8 months. The first time he served 10 months. His second time in prison was 22 months, which was without a legally precise accusation. The Israeli army found an Al-Quds magazine on his roof, thus sentencing him to 4 months and an additional 18 months for being a “reoffending” convict.

Story: Belonged to a political organization (Fatah), which led to problems with Israeli forces. Accusation alleges that he shot at settler cars.

Visits: His parents, due to their advanced age, find it very difficult to travel all the way to the prison; they have not seen their son in 6 years. However his brother visits him every month.

Story: The Abu Ali family has a history of repression from the Israeli forced because of their involvement with the PFLP (Popular Front of Liberation Palestine). There are four sons in the family. One of them was shot in the head by Israeli forces and now suffers from schizophrenia: he has lost 69% of his mobility. His left hand is incapacitated; he also suffers from insomnia, sleeping during the day, and has isolated himself from both family and acquaintances.

The second son was wanted by the Israeli forces but is now under the protection of the Palestinian Authority (PA).

Their third son was murdered on the 9th of October 2000 at the main entrance of the village: he was shot in the back of his head. He was an active member of the PFLP and involved in prisoner support networks.

Finally, Saed had been sent to prison with a sentence of 3 years, although it is not his first time in prison. During this time the family was not allowed visit him, possibly because of the family’s involvement in the PFLP. 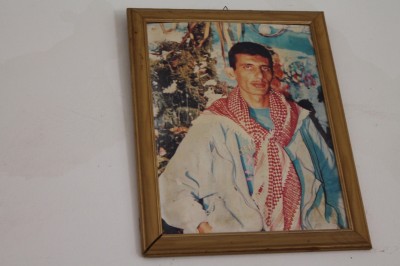 The third son of the family, who was murdered by Israeli forces in October 2000

Sentence: Currently unknown. He could face 2 to 5 years according to his father.

Prison: Huwwara and al-Jalami. Exact location unknown, but it’s very likely he is under interrogation.

Story: The Israeli army arrested Mages on the 2nd of April at 02:30 in the morning. According to Mages’ father, he had a rib broken during the arrest. The Israeli army has accused him of possessing a gun and pointing a weapon at illegal settlements. One of the witnesses is a captain in the Israeli army. The family did have a gun, but handed it to the PA when they were asked about it, no weapons have been found by the Israeli forces.

Visits: None so far, possibly once a month if convicted.

Story: Tamer spent the first two weeks in Megiddo prison where he was able to send news to his family through the prison doctor. Once transferred to Shita, no contact has been possible and the family doesn’t know much about Tamer’s situation. His lawyer says that in a month the family will know the sentence. He is still under interrogation and is therefore not allowed to have any contact with his family.

Right before he was arrested he was planning to sign in to university in Tulkarem. He is accused of stone throwing at the Israeli army, however this accusation relates to events that occurred a year ago. The town of Azzun receives almost daily visits from the Israeli Army since there are illegal Israeli settlements less than a kilometer away.

Visits: None since he was arrested. 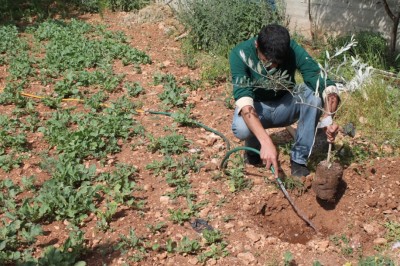 Story: Mohammed was arrested on the 10th of April 2013 while he was sleeping. The Israeli army assaulted his house both through the door and the roof. He woke up with an automatic weapon pointed at his face.

That same night, the Israeli Army began looking for money and visa cards around the house. Two mobile phones and a computer were confiscated which have not been returned. The accusation against Mohammed was that he was politically active against the occupation.

Mohammed described the food within the prison as both “unhealthy and insufficient”. They could buy groceries and other utilities but these are at least twice the retail price. Prisoners were allowed out of their cells twice a day, for two hours each time.

Visits: Once a month, however frequency of visits depends on the prison. 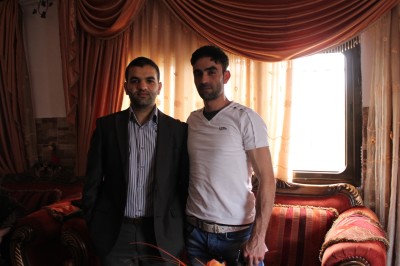 Mohammed (on the left)

Sentence: 3 years, although he was imprisoned for 2 years and 2 months without a sentence

Accusation: Stone throwing and belonging to an organization, PLFP

Prison: 2 months of interrogation in Betah Tikfa, then 2 years and a half in Megiddo before a further 5 months in Naqab

Story: Arrested in Awarta at 14:00. At the time there were no witnesses in his house to witness his kidnapping. Raes was interrogated for 2 months. The judge accused him of stone throwing and belonging to the Popular Front for the Liberation of Palestine (PFLP), and called for a sentence of 5 years in prison. During the trial he refused to testify and with the help of the lawyer the sentence was reduced to 3 years.

Belonging to the PFLP is synonymous with high sentences, since the Israeli state considers this organization as a “security threat”.

Life in prison is “difficult to describe in words” said Raes. Prison guards and management don´t consider them human. For instance strawberries are forbidden inside prisons since they are considered a “security threat”.

Prisoners cannot speak to their families until they have visit permits granted and there is limited amount of food to eat or buy.

Interrogation takes place in a dungeon of approximately 1 square meter, without lights and with black walls. There are around 12 or 13 rooms like this in Betah Tikfa. Raes has breathing problems but he was confined with another prisoner, which exacerbated his condition. Soon both prisoners asked to be taken out of that cell due to the precarious conditions brought about by the lack of oxygen/air. The interrogator arrived with a soldier (carrying pepper spray, no gun) to address the air issue. Since it wasn´t resolved, they began a hunger strike (18 days), which then lead to a reaction by prison management.

During interrogation there is no access to a lawyer. If you do not answer the interrogator´s questions, prisoners are forced to sit down with their hands and legs cuffed, sometimes on a chair or even the floor. This can carry on for days leading to serious pain, especially in the lower back. Interrogators may continue with this exercise for as long as two weeks.

After interrogation he was taken to prison. He recalls being woken up at 6AM, at that time prisoners had to be standing up, if not, beatings were common. The Israeli army then counts the prisoners at 10 am and 8PM, doing cell searches at 9 am and 6 pm.

Finally, some spontaneous visits can happen at 1 am in the morning. Israeli soldiers generally don´t carry live ammunition weapons inside prisons, although sometimes they do.

On the 11th of April a prisoner was shot dead in Naqab according to Raes. Inside prisons, the use of pepper spray and rubber coated steel bullets is common.

Food is both of low quality and quantity. Prison management, according to Raes, has banned eggs and potatoes, leaving only beans for breakfast every day. Dinner was 2 yoghurts to be shared between 10 prisoners. A third meal would generally consist of fruit and/or vegetables, sometimes in bad condition, such as tomatoes and peppers. For 6 months, prisoners would be given oranges, for the remaining 6 months of the year, apples. Sometimes some bread was also given with the meals, although this is not the case during Passover.

Raes went on a second hunger strike, lasting for 23 days, to liberate an imprisoned leader of the PFLP (Ahmad Sa’adat) from solitary confinement. 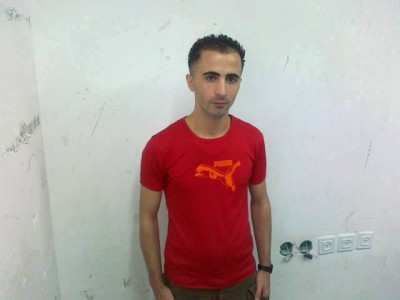 Sentence: 30 years, sentenced without a lawyer.

Story: During the Second Intifada, Ahmed was a police officer of the PA. Nablus was under attack from the Israeli army, an Israeli military tank was mobilized and stationed near the Old City Market in April 2002, where Ahmed lived. Ahmed’s father, Hussein, was in fact injured at this time. He has live ammunition bullet injuries in his legs, and shrapnel affected other parts of his body.

In August 2002, the Israeli army was stationed in a hill overlooking Nablus. The Israeli army opened fire on the city market and killed Hussein’s brother (Ahmed’s uncle) while he was standing on the roof of his house. Ahmed managed to jump out of the line of fire to save his life. At this point, Ahmed decided to defend his city at a time when there was no clear leadership in the PA, according to Hussein. He planted a bomb to avoid Israeli incursions getting further into the city of Nablus. Ahmed got into crossfire with Israeli soldiers, injuring one of them.

In November 2002, Ahmed was arrested while he was sleeping in his sister’s house. He was sentenced to 30 years in prison without the right to a legitimate legal defence (Article 72 of the Convention (IV) relative to the Protection of Civilian Persons in Time of War. Geneva, 12 August 1949). The Israeli soldier claimed that he fired warning shots, but that Ahmed fired upon them.

According to his father, he was attacked by dogs in the prison of Hadarim, which has had led to internal bleeding, possibly related to anxiety and physical injuries. Only in the last two years has Ahmed had access to a lawyer, which has been provided by the family at a very high cost. Given Ahmed’s case, the lawyer and the family are fighting to get him out of prison this year. Ahmed has a 10 year-old sister whom he has only met through the prison’s windows.

Visits: None during the first 4 years. Currently one every 6 months but can be up to 2 years without a visit. Father and sister have permits for visits. 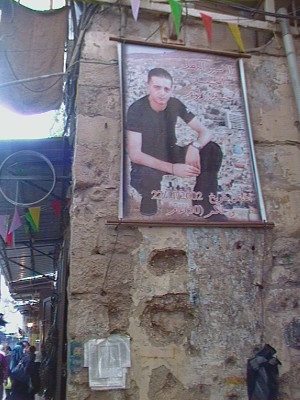