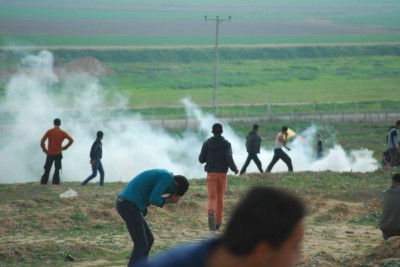 The regular Friday demonstration at the “buffer zone” east of Jabaliya was stopped by Palestinian police and security forces. The Israel had send a message via Egypt to the Palestinian authorities in Gaza that it would not tolerate any demonstrations and that it intended to shoot at the upper body of those who approached the separation barrier. From the crest at the slope of the hill on the other side, down to the fence and its rolls of razor wire, several Israeli military vehicles were seen. Palestinian police and security forces had a tough task keeping demonstrators away. Ambulances on standby stood behind them, but fortunately the Israeli military did not make their threats a reality.

Islam Shahwan, spokesman for the Palestinian ministry of the interior and national security in Gaza, later said in a statement posted on Facebook and released through the ministry, “It was our commitment to the lives of the our young people from getting shot by the Israeli army through lack of access to the fence and to keep young people away a little bit in order to preserve their lives.”

The demonstration was planned in dedication to Muatazz Washaha, 24 years old, who had been killed by the Israeli military the day before in the West Bank village of Birzeit. Military forces of the occupying power had surrounded the house where he lived, let other residents evacuate, then shelled the house, well aware that Muatazz were there. Like earlier targeted killings in the occupied territories, the Israeli military is very restrictive regarding protests, and has previously used violence against any form of demonstration. The warning to Gaza that the Israeli military intended to shoot at the upper body of civilians who approached the fence must be understood in light of the incident in the village of Birzeit.

According to an officer at the site of the planned demonstration, no more protests against the occupying power or its abuses will be allowed in the “buffer zone.” They have, on every occasion, resulted in a dozen injuries from live ammunition, as well as direct hits of tear-gas canisters. Mohammed Helles is still in a coma at Gaza’s al-Shifa hospital after he was hit in the head with a canister at the previous demonstration.