New
Home / Gaza / “Soldiers opened fire at our boat and engine. We were about to sink”

“Soldiers opened fire at our boat and engine. We were about to sink” 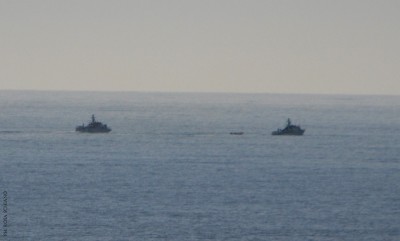 “At about 2:00 pm, Israeli vessels approached our boat and soldiers started shooting,” Jihad said. “We were about four miles offshore. We tried to escape. Soldiers opened fire at our boat and engine. We were about to sink. Our boat was destroyed.”

The two fishermen had tried to escape, and were returning to the coast, when they were forced to stop and were detained about two and  a half miles off the coast of Gaza City.

Members of the International Solidarity Movement watched their detention from a building in Gaza City. A video shows two Israeli gunboats towing the fishing boat after its capture.

“A soldier ordered me to go to the front of the boat, take off my clothes, dive and climb aboard their ship, which was a few meters away from our boat,” Jihad said. “I was not willing to take off my clothes, but they shouted for me to do so. My cousin Shabaan was trying to convince me to listen to the Israeli soldiers.

“I decided to swim. When I reached the ship, the soldiers pulled me on board. They made me wear a pair of trousers. I was handcuffed with my hands behind my back, blindfolded and hooded.”

As the Israeli gunboats headed to the Israeli port of Ashdod, the soldiers asked the two fishermen for general information, their name and ID number. “I don’t remember the number of my identity card,” Jihad said. “I told the soldier, who then used force on me. He was trying to get information from me. Then another soldier said, ‘Leave him.’” 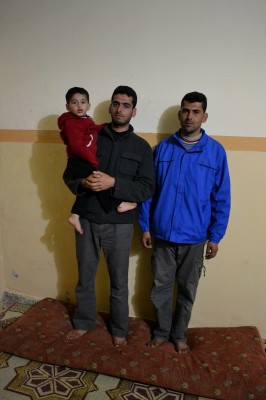 At the port of Ashdod, soldiers removed the bandages from the eyes of the fishermen and freed them from their handcuffs to allow them to leave the ship. The fishermen were given sweatshirts and slippers.

“We were hooded and handcuffed again,” Jihad said. “We were then taken to a small room where soldiers freed us from handcuffs and bandages. A female army doctor checked our health condition and blood pressure. When she finished, we were handcuffed and blindfolded again.

“We were left alone for about twenty minutes. Then a detective came to interrogate me. During the investigation, they took the bandages off my eyes while my cousin was still blindfolded. The investigator asked me the names of my family members, from the smallest to the eldest. He asked me who my friends are. Then I was blindfolded and handcuffed.

“Then a soldier came, freed me from handcuffs, hit me hard in my back and said I could go home.”

The two fishermen were transported to Erez and crossed into the Gaza Strip around midnight.

Jihad had already been arrested by the Israeli navy once in 2008. His cousin Shabaan was arrested for the third time.

A fisherman said that since 2010, Israel has not returned any of the small fishing boats it has confiscated.

Jihad has two young children and has been a fisherman since he was ten. His family is a family of fishermen.

Thirty-one people from Jihad and Shabaan’s families depended on the confiscated fishing boat. It was their only source of livelihood. Jihad’s family owns another small boat, without a motor and slightly damaged.

“Neither of them worked,” Shabaan’s father said. “There is no hope for them.”

Al-Shati refugee camp was dark. For a few days, the Gaza Strip had only six hours of electricity daily due to the lack of fuel. The power went off around 6:30 pm, when the ISM’s meeting with the fishermen ended.

In the camp, a strong smell came from sewage flowing along the asphalt. Some children played on roller skates. One of them fell in the darkness, but he stood up immediately. They smiled when a group greeted them.

Looking at the sea on my right, I watched the lights of the fishing boats and the helplessness that I felt during our meeting mingled with anger.

“The situation here is getting worse and worse,” a Palestinian said.

Here people continue living thanks to donations and meager food parcels. “The refugees,” victims of a double injustice, still dream of returning to their lands and hand down their history and their right of return from generation to generation.

The Israeli army perpetuates its daily violations in the light of day. For many years, thousands of reports have denounced these violations with no result. No international power intervenes to stop Israeli forces, no international body sanctions Israel. For this reason, Israeli naval forces continue entering into Gaza seas, in which they impose an illegal blockade, and do what they want.

Sometimes, fishermen who have been attacked ask what can they get through  reports like this. How can we answer? Sometimes we tell them that the reports are helpful in order to raise awareness among people. But in practice, if our institutions will not take action against the Israeli government, nothing will change. BDS (Boycott, Divestment and Sanctions) against Israel is a good response to Israeli violations.

Although officially the limit imposed by Israel on Gaza waters is six nautical miles off the Palestinian coast, Israeli naval forces impose a limit of one or two miles in the waters to the north of Gaza Strip. The limit is shrinking even in the waters in the south of the Gaza Strip, especially off the coast of Rafah.

These continuous attacks against Gaza fishermen undermine their ability to subsistence and constitute a violation of international humanitarian law.