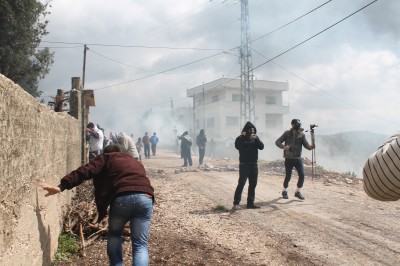 Bank. The participants carried posters of one of the martyrs, Moataz Washaha, who was assassinated by Israeli forces on February 27th, in his family home in Bir Zeit.

Before the weekly demonstration started the army and border police were already stationed on the closed road going through the illegal settlement of Kedumim and on the hilltop overlooking Kafr Qaddum. When the demonstration was marching along the road, the army threw sound grenades and shot large amounts of teargas canisters at people. Several persons suffered from teargas inhalation and other four were hit by teargas canisters fired directly at them. During the protest, Israeli soldiers tried to get to the demonstrators by hiding between the houses, but were successfully pushed back by the villagers.

Since July 2011, the village of Kafr Qaddom holds weekly demonstrations against the occupation of Palestine and the closure of the road connecting Kafr Qaddum to Nablus. The road was closed in 2003 as a result of the construction of the illegal settlement of Kedumim. Now, residents of Kafr Qaddum have to make a 15 minutes detour to get to Nablus. The settlement of Kedumim together with four other surrounding settlements, have taken 4000 dunums of the village’s land. Farmers seeking to reach their lands face threats, attacks and arrests from settlers and the army.