Yousef and two of his friends were trying to pass though a hole in a wire fence to reach Palestinian land that has been stolen by the Annexation Wall, in order to collect vegetables for their families. The soldiers shot Yousef three times in the chest at close range resulting in his death. His two friends were shot in their legs and later arrested. In the past, children have crossed the Apartheid Wall at this point to collect food from the stolen land, but this is the first death.

Yousef’s body was returned to his home in the afternoon. The villagers of Deir Al-Asal al Fauqa are very close and describe themselves as coming from the same family. When Yousef was returned he was carried on the shoulders of his brothers into the local school grounds so that his people could pray and show their respect. His body was then carried; to be laid to rest on a hillside while his neighbours came out from their houses to pay their respects.

The internationally condemned Apartheid Wall imprisons the West Bank and directly affects may communities’ throughout Palestine. It runs for 420 kilometres, and has stolen 12% of the West Bank. Under the Oslo Interim Agreement a further 60% of the West Bank has been lost due to many illegal settlements and the military control of the Israeli army. Israeli forces have murdered 1519 Palestinian children since September 2000, an average of 1 child killed every 3 days. 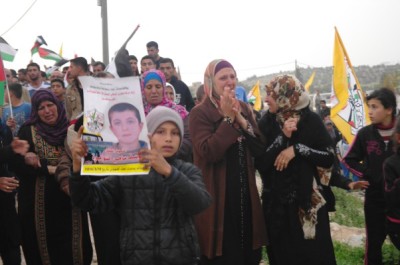