Large amounts of Israeli forces and Border Police have made several attempts to raid the reclaimed village of Ein Hijleh and in return the villagers stopped their forced advancement into the center of the village. There were many cases of teargas suffocation as well as an injury in the leg resulting from a teargas canisters being shot directly at the youth preventing the raid. 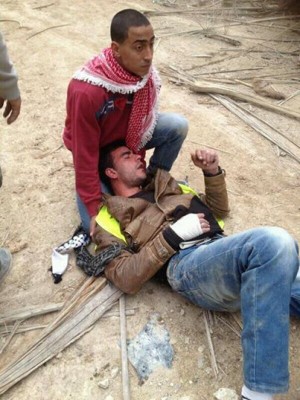 A man suffering from teargas suffocation in the village of Ein Hijleh. (Photo by PSCC)

These events came as a result of Israeli forces confiscating a welcome sign in the name of Ein Hijleh that was placed on the so called Route 90.

Furthermore, two Palestinian youth were injured last night (3rd February) after physical clashes erupted with Israeli Forces. Palestinian popular resistance activist Abedallah Abu Rahmeh was injured in his arm resulting in multiple fractures, as well as Palestinian youth Mohammad Al-Khatib suffered from several rib fractures. Both were taken to a hospital in Jericho for treatment. It is important to note that Israeli forces impeded the entry of the ambulance carrying the patients back to Ein Hijleh and forced the medical crew as well as the injured to continue their way on foot.

The village is under continuous besiegement by Israeli forces in which water, food supplies and medical crews are prevented to enter.

In regards to the village activities for today, (4th February) the villagers have renovated several homes, volunteer work in which 150 trees donated by the Environmental Relief were planted around the village. Evening activities carry on including art activities well as cultural and political discussions.

Moreover, Israeli forces have detained 18 volunteers as they were entering/exiting the village including an international solidarity activist whom was released later on. This escalation comes as a series of attempts by Israeli forces to place pressure on the village as seen from the attempts on raiding the village on the fourth and fifth days (February 3rd and February 4th) of the reclamation of the village. However, the villages prevented these attempts by creating human chains and face to face confrontation.

The organizational committee conducted a meeting in which the weekly agenda for next week was created and agreed upon. The agenda is as follows:

Wednesday:  Day of solidarity and expanding popular activities in reviving and renovating the lands and houses of Ein Hijleh.

Thursday: Day for diplomatic participation and embassy representatives to inform them on the situation of Ein Hijleh including information about the siege on the village which bans the entry of food, water, medical supplies, and journalists by Israeli forces.

Friday:  Friday prayer in the village followed by a volunteer program for planting trees and continuing the renovation of the homes in Ein Hijleh.

Saturday: Cultural Academic day in which lectures for Palestinian university students will be held to inform the students about the reality and history of Ein Hijleh.

Sunday: Day of prayer will be held in the village to reiterate the unity of the Palestinian people regardless of the religious, ethnic, and political differences.

All days will include cultural activities in which Palestinian academics and artists will take part in during the evening. 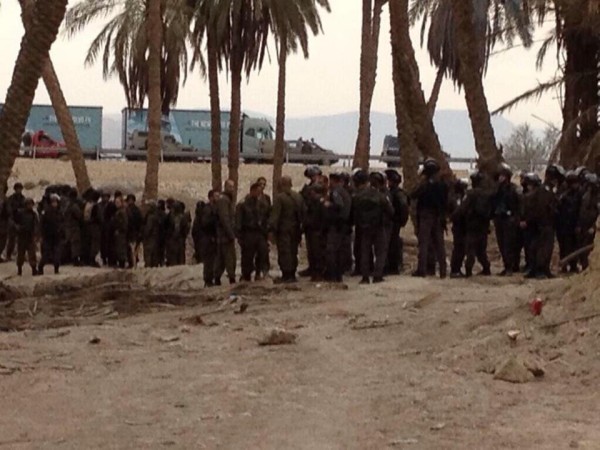