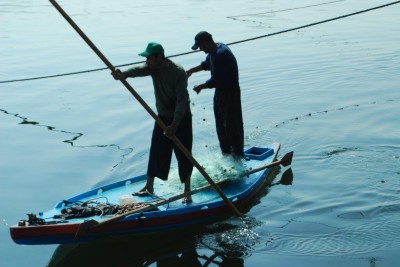 Three Palestinian fishermen were arrested and had their boats and gear confiscated by occupation forces on Tuesday, 11th February, in two separate incidents, despite the fact that they were well within the Israel-permitted zone and could not be classified as security threat to the State of Israel, its civilians or its military.

Mohamed Sleeby, 42, paddled out early in the morning in his hasaka with his son, Ahmed, 16, from the beach at Shati, north of Gaza City. Mohamed’s boat is a smaller hasaka without an engine, four meters long, and can only fish close to shore. While they pulled on their nets about half a nautical mile from the shore, Israeli patrol boats approached. When they started shooting, other Palestinian fishing boats nearby fled.

“It was like a horror movie,” Mohamed said. “I closed my eyes. When I opened them again, they were right in front of the hasaka with aimed guns and masked faces. They shot into the water right next to us and ordered us to strip completely naked and swim, one at a time, towards them. It was humiliating to stand there completely naked in front of them, stripped of all humanity, with my son at my side. But I dared not disobey.”

Despite his fear, Mohamed asked that his son be spared. The soldiers shouted at him to shut up. They shot near his son, even though he held his hands outstretched while waiting for his turn to step into the cold water. Once they were pulled onto one of the patrol boats, they were given clothes, but hoods were also pulled over their heads. They were taken to a waiting, larger military boat outside zone allowed by Israel to Palestinian fishermen. Even with shackles on the hands and feet, they were forced to kneel on their knees. Fadel Al-Sultan, 25, was also on board. Earlier that morning, he had also been detained, and had his small hasaka without an engine seized, less than half a nautical half from the shore.

In Ashdod, they all underwent health checks, were photographed holding their results and their personal details on sheets of paper, and were accused of having been outside the permitted zone. Fadel, who had previously been captured twice while fishing, was threatened with being sent directly to jail without trial if he was caught again. As with previous detentions of Palestinian fishermen, the interrogators focused on collecting information about government buildings and their staff in Gaza, on possible contacts with insurgents and on personal networks. Unlike previous detentions, they also asked where any fish farms were located on land. Later they were transported to Erez, where a new hearing began with Mohamed Sleeby, his skin was checked for traces of explosives and attempts were made to recruit him to the Israeli intelligence service.

“He [the lone interrogator] knew everything about me,” Muhamed said. “He knew I did not pay taxes on electricity. He offered to pay them, promised I would get my hasaka and nets back, and even said I would get a little money. He said I should not be afraid, that I am in good hands and that no one but me, him and God would know anything about this, that I ought to think about my family and not miss the chance. But I cannot do that to my brothers and neighbors. He said I should think about it and that he would contact me by phone. But how can he do that? It was left with my clothes in the hasaka they seized. No, I would rather starve than help the ones keeping us in poverty.” 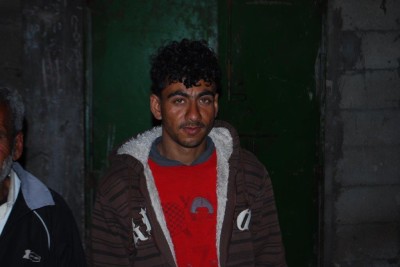 Muhamed Sleeby and Fadel Al-Sultan’s answers on why the Israeli military attacks the fisherman so close to the shore, even though they can pose no threat to the State of Israeli or its residents, were consistent. “They want to make life even more difficult for us,” they say, “to prevent us from supporting ourselves.” Fadel also says that to get better catches, they need to go 7-8 nautical miles from the coast, but that is impossible because Israel has limited them to six nautical miles. But even that limit is irrelevant, as they are attacked so far inside it that they all have to fight for the small catches along the beach. Those who have to paddle out to fish are now competing with larger boats forced toward the shore.

In January, thirteen attacks have been carried out by the Israeli military against Palestinian fishermen. At one time the occupying power decreed a six-nautical mile limit, at another three miles, but it has consistently attacked far within three nautical miles from the coast. Both these attacks and the limits are violations of international law.