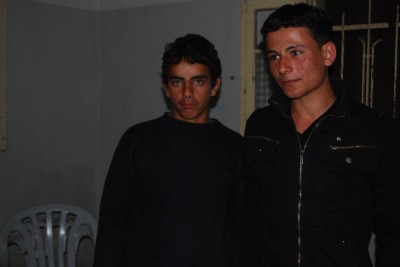 On Monday, 20th January, at about 6:00 am, Yousef Amin Abo Warda (age 18) and his cousin Ahmad Kamal Abo Warda (age 16) left their house to go fishing in a small boat without an engine.

Around 7:30 am they were fishing in front of the al-Waha area, in the northern Gaza Strip, and sank their fishing nets about three kilometers, or 1.6 nautical miles, offshore.

Yousef said two large Israeli gunboats approached the fishing boats. While other fishermen were able to escape, for Yousef and Ahmad it was impossible, as their boat had no engine and was made heavy seawater seeping through a hole.

“Soldiers from one of the gunboats began shooting into the water, while the second gunboat quickly turned around us to create waves,” Yousef said.

The soldiers, as they usually do when they want to arrest fishermen, asked the two young Palestinians to undress, dive into the water and swim to the Israeli ship.

“I tried to get closer to their ship by swimming, but the ship moved away, so it became hard for me,” Yousef said. “I cried that I was tired moving my arms. I could no longer swim. The ship stopped. I went directly to the ladder that they putdown and I climbed on board the ship.”

“They made me kneel down and handcuffed my hands behind my back,” Yousef added. “They gave me some clothes and helped me put them on. They yelled to my cousin Ahmad to swim toward the ship. After about half hour Ahmad was sitting behind me. Our hands and feet were tied.” Moreover, the soldiers kicked the two fishermen on their back.

The arrival at the port of Ashdod

After about half an hour the ship reached the Israeli port of Ashdod. The soldiers removed the bandages from the fishermen’s eyes, as well as their cuffs, to allow them to get off the ship. On shore, the fishermen were again handcuffed and blindfolded. They were asked personal information: their names, place of residence, dates of birth, phone numbers. Some soldiers wrote this information in Hebrew on a paper. They asked Yousef to hold the paper in his hands and took a picture of him. Yousef and Ahmad were held in two separate rooms for about three hours. Then some soldiers took Yousef into the room where Ahmad was detained. They left them handcuffed in a room for another three hours. Then some soldiers made the fishermen get in a Jeep and brought them to Erez.

Erez and the interrogation

At Erez, the two fishermen were brought into a room and interrogated separately.

The investigator asked Yousef about his name, his family, his brothers, the age of his relatives, his work and other personal information. “The detective showed me on a computer a map of the city of Jabalia, he told me the name of the streets with specific details,” he said. “He asked me to select my house. He showed me a house in which some people working for Hamas and the al-Qassam brigades are living, and he asked me if I know them. I said no. Then he showed me other houses belonging to people connected with Hamas. He indicated more than two houses. He was trying to get information from me. I said I don’t know anything. He told me ‘Are you afraid? You are in a safe place and you can tell us everything. These people are trying to destroy your life, they are terrorists.’ He indicated about six families that live in my neighborhood”.

The investigator showed him also the beach and asked him on which part of the beach he usually works and where he keeps his boat. The investigator also asked him also about a police site in the area and how many people work there. Yousef replied that he knows only two policemen, to whom the fishermen show their permits on the beach, and that he doesn’t go to the governmental site. The investigator asked Yousef about a training site of the al-Qassam brigades. Yousef replied that he doesn’t know anything about it. “The investigator then showed me photos of some hasakat [small fishing boats] and asked me to whom they belong, and he asked me about some cafes on the beach and about the harbor. I told him that I don’t know anything about the harbor and I don’t go there. The investigator asked me ‘In Jabalia refugee camp there is a site that belongs to Hamas?’ I told him that I don’t know.”

“The investigator asked me what I thought of al-Sisi [commander of the Egyptian armed forces] and how the relation are between Hamas and al-Sisi. I told him that I do not follow the news or politics. I said,‘I go to fish and I go home’.

“The detective told me ‘If you are near the border and you get shot by the army, who will you blame and would you consider responsible?’ ‘You are responsible,’ I said. He replied ‘Hamas should be blamed, not us.’”

“The investigator then asked me, ‘What do you think of the Hamas government and what is your opinion of it in comparison with Fatah? Do you feel comfortable? Why did you elected them? You were happy under the Israeli government. Many Palestinians came here to work and had money. Can you compare your current life to the life in which Israel controlled Gaza?’ I told him that I’m only 18 years old. I can’t know and I have never gone to Israel.”

The investigator then asked Yousef about the tunnels , Yousef replied that he’s just a fisherman and has never seen one. Finally, the investigator asked him if he was feeling hungry. Yousef said yes. The soldiers brought him a shawarma sandwich and a Coke.

Yousef was then taken to another room and remained there for an hour. Meanwhile, investigators had questioned his cousin Ahmad. The soldiers then accompanied the two young fishermen to the Erez gate and told them to return to the Gaza Strip.

“They closed the door behind us,” he said.

Their relatives, frightened by the lack of news, had tried to contact the International Committee of the Red Cross and other organizations. They also asked some fishermen to look for them in the sea. But only around 11:00 pm did the ICRC inform them that the two had been arrested.

The large family Abo Warda, whose name is also used to denote the area where it lives, includes about 35 fishermen, of whom about half have been arrested.

In November, two other young men from the same family, Saddam and Mahmoud Abo Warda, were also arrested. One of them suffered a light injury inthe abdomen caused by Israeli gunfire. Both were attacked while fishing on a boat without an engine, and were therefore unable to escape.

Several of the family’s boats have been confiscated and are currently in the Israeli port of Ashdod.

Yousef and Ahmad have lost their fishing nets.

“Before, we had three boats with nets,” Yousef said. “Now my family has only one boat and no nets. I ask the international community to stop these Israeli attacks.”

“Eight persons in this house are fishermen,” another fisherman said. “One of our boats was damaged during Israel’s ‘Operation Pillar of Defense’ in November 2012. We can’t fix it and need to buy new nets.”