Since the Zionist occupation forces’ bulldozers had destroyed part of Khaled Qudaih’s field in Khuza’a, east of Khan Younis, he and his family went out to sow it again. The military responded with about half an hour of gunfire, threatening to  strike Qudaih directly if he had not moved away. 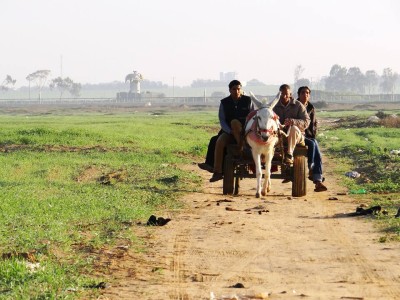 Qudaih had sown wheat a little less than a month ago. It was growing, it was green and in May would be ripe. On 19th January, he went to his lands with his family to spray fertilizer. Samiha, his twelve year old daughter, wanted to get closer to the separation barrier, but she knew that it was forbidden : mamnua in Arabic.

She came as close as she could, until she reached foreign activists with yellow jackets. She approached and, with the voice of a twelve-year-old child, with the slightly clumsy behavior of those approaching foreigners for the first time, explained that the land is forbidden to her . 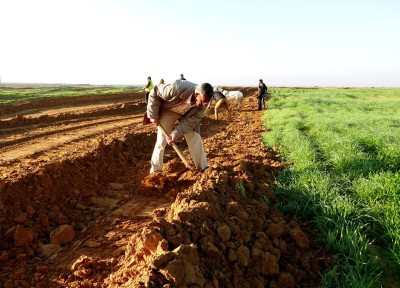 “I am forbidden to approach the barrier more than this,” she said. “Over there, there are the Israelis and they shoot. That land is prohibited (mamnua). It is my family’s land and  is prohibited. Sometimes the Israelis shoot even when we are away from the barrier, but today it is quiet. Will you come back when we will harvest? For the harvesting, the whole family will come. There will also be my grandfather, uncles …  a few days ago the bulldozers came and destroyed this plot of land that we had sown. Now it is destroyed.” 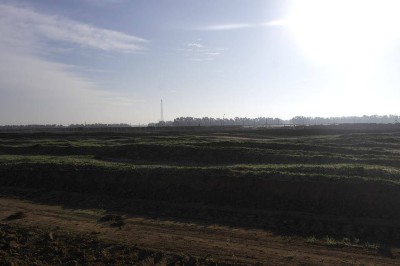 It gives a certain feeling to hear that horrible word mamnua from a young girl referring to her family’s land, “prohibited.”

In any case, on the 19th, fertilizer was sprayed fertilizer and there was no Zionist aggression.

Qudaih, however, was not entirely satisfied.

There was the land he had planted at the edge of the field, beside the barrier, which had been destroyed by occupation bulldozers. Even that was his land. The Zionists had no right to prevent him from cultivating it, to prevent him from reaping its benefits. He would be back the next day to reclaim it. That land could not be mamnua, “forbidden,” because it was his land, because he had also sown there, because the grain was used to make bread for his family, because the stems and bran are used to feed the sheep in his backyard , and they produce milk to drink and wool for warmth. No, not even the extreme limit of his land, 50 meters from the barrier, could be mamnua land. 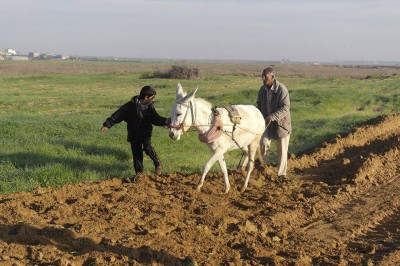 So Qudaih promised that the next day he would return. He would come back with hoes to clear the ground , and with  the donkey and plow for after sowing. If it was not under Zionist threat he would do it all with the tractor. But not here. This area is too close to the separation barrier. The Zionists would not let him use a tractor.

Qudaih’s case is not an isolated one. Indeed, one can almost say that he is lucky, because usually, it is impossible to approach the less than 300 meters from the separation barrier. This is not only to attack the freedom of movement of Palestinians in their own land, but also their right to work, and , even worse, their food self-sufficiency. The Gaza Strip’s population density is among the highest in the world and, with its demographic explosion in progress, the enclave is becoming increasingly dependent on external aid, unable to meet its own needs.

Qudaih reaches his land with his wife, his wife’s sister, and three of his sons. Wael, no older than ten years, is also among them. Some foreign activists accompany them. A donkey cart carries the seeds, hoes and plow; Qudaih leaves the cart at the edge of the field, farthest from the barrier, and carries everything by hand. The Zionists cannot claim they could not see what was on the cart, and nothing, neither the donkey nor the material it brought could pose a threat to Israel’s security or the safety of the soldiers of the occupation forces. 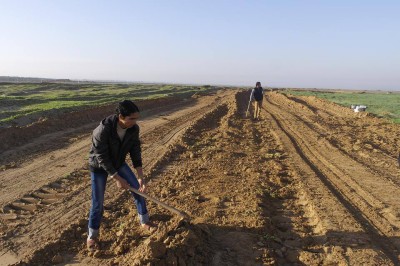 Qudaih and his sons aggressively work the ground with hoes. After about ten minutes a Jeep arrives. A few seconds after it stops, the Zionists shoot a few rounds of gunfire, without any warning, without any provocation toward them. Qudaih and his sons, including Wael, are not intimidated and continue to work. Their land cannot be mamnua just because a racist and unjust occupation force has decided so. Who is stronger, the occupation forces with all their weapons and armor, or these farmers armed with hoes? The older children continue to pave the way. Khaled holds the plow in the right position while Wael drives the donkey. It takes a long time to plow the land with the donkey, because it cannot pull a heavy plow, only a small plow, which must go back and forth several times.

While the farmers continue to work, several Jeeps pass on the other side of the barrier. They continue to shoot every now and then, just to remind that they are not gone, and that the land is mamnua. But Qudaih and his family do not move away until a soldier exits a Jeep. He remains a few minutes hidden behind a mound of earth, created to hide the occupation forces,, and then comes out shouting, in Arabic with a strong Hebrew accent, that they have to leave otherwise he will have shoot to hit them.

While it is nice to think that the presence of internationals helped ensure the soldier got the first shot in the air, and that it has discouraged them from directly targeting Qudaih, on the other hand, it is frustrating to realize that if this happens it is only because the world is fundamentally racist , and a witness from the West is more inconvenient than a Palestinian witness.

Meanwhile, the soldier continues to shoot. Not only single shots, but also bursts of gunfire. At first Qudaih continues to plow the land. Then he must desist: He has a family, he can not afford to get hurt, he needs be able to continue working. Then, half an hour after the first rounds of gunfire, all of us return to where the donkey had been left, with the cart, in safer territory.A  few grains of wheat remain on a spot that Qudaih has not been able to plow, in a Palestinian land where a violent occupying force said mamnua.