Palestinian fisherman kidnapped by the Israeli navy in Gaza waters 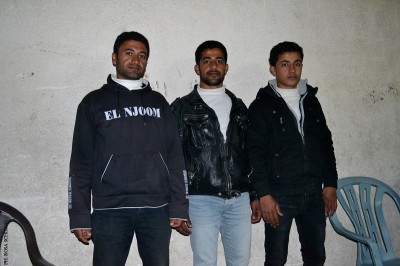 On Wednesday, 8th January 2014, 27-year-old Palestinian fisherman Mohammed Sultan Al Khader had was arrested by the Israeli navy in Gaza waters. He had been fishing with his two brothers, Ahmad and Hamdi, on a small fishing boat, called a hasaka. Al Khader was released in the evening.

The Israeli soldiers shouted for them stop the engine and approached the front of their boat. “Stop the engine, approach us, raise your hands,” they shouted to the fishermen.

“Then they asked us to jump into the water,” Al Khader said. “I told them that my brother was too young and could not swim. I took off my dresses and jumped into the water. Some soldiers pulled me on board the Israeli speedboat. One of them asked me about the two other fishermen. I told him that the young one could not swim and the other one was sick and would have died. ‘I will let your brothers go home and I will take you’, he told me.”

The soldiers gave Al Khader some clothes. Then they forced him to again jump into the water and swim until he reached a large Israeli gunboat about 90 meters away. On board the gunboat, the soldiers blindfolded him, dressed him and cuffed his hands and feet. “Then I did not see what else was going on,” he said. “I could not see anything.” In the Israeli port of Ashdod the soldiers uncuffed his feet and removed the blindfold from his eyes. Then he was interrogated. During the investigation, the soldiers again cuffed his hands and his feet. He said there were two persons, one speaking Arabic and the other Hebrew. Investigators asked him about his name, age and phone number, personal details about his brothers and family, and other personal information. Then they hooded him and left him alone in a room for about an hour and a half. “Then five soldiers came, including one speaking Arabic,” he said. “He said, ‘I will show you some pictures and you will tell me what you see.'” He asked me on which part of the beach I used to work. He showed me pictures of it. They had pictures of each area. ‘Select one of the pictures’, he told me. I chose a picture of the beach area in which I work. The investigators told me to show a governmental site close to the beach and asked how many people work there. ‘I don’t know,’ I said. ‘I don’t know anyone one working there.’ I said. He asked me how it was possible that I did not know anyone if I need to go there to get my permit to work as fishermen. I told him I only know two persons who came on the beach outside the governmental site. Then the investigator asked me about another governmental site of the civil defense. He asked me if the police there had guns. I told him that I did not know, that some of them did and others didn’t.”

“Finally, the soldier told me ‘Thank you for your help,’” Al Khader said with a hint of irony. “Then I was forced to talk to someone on the phone who asked me my name again, personal information, the number of my identity card. They left me alone for two hours. Then the soldiers came back with a paper which was written in Hebrew. They made me wear nice clothes, asked me to hold the paper and took a picture of me.” He didn’t know what was written on the paper. Another fisherman said it was likely tobe a medical report about his health condition that the Israelis could use in proceedings against them in court.

“They covered my face again, they handcuffed me and made me undress,” Al Khader said. “Then a soldier asked me to get up and sit down three times. Then they again made me wear the clothes. I was handcuffed, hooded and taken by car to the Erez crossing, at about 6:10 pm.”

Al Khader is married with a two-year-old daughter and a four-year-old son. He lives in a small, two-room, house,  waiting to move into a new house under construction. “Due to the siege, there is lack of building materials,” a relative said.

Fishing is the only source of livelihood for his family, like hundreds of others.

Moreover, it seems clear that through these detentions, the Israeli authorities are trying to obtain information about people and places in the Gaza Strip.