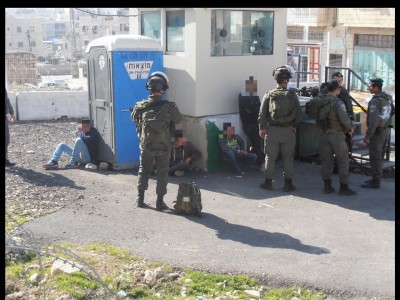 The four youth detained by the checkpoint (photo by ISM).

This morning in Khalil (Hebon), a large group of Israeli border police and soldiers gathered outside checkpoint 29. Israeli forces fired several tear gas grenades towards a school, detained four Palestinian youth and arrested three of them, taking them to Kiryat Arba police station.

At approximately 10:30am, at least 30 Israeli border police and soldiers stood outside checkpoint 29 and fired one tear gas grenade. The grenade was aimed towards a school; there were no children in the streets and no youth throwing stones. Israeli forces entered through the checkpoint and proceeded towards the school.  A further tear gas grenade was fired seemingly without purpose and away from any people. A group of young Palestinians, all under the age of 10, were forced to hide in a local shop due to fear at the aggressive border police. Israeli forces fired a final tear gas grenade towards the school before heading back towards checkpoint 29.

One of the detained youth was released, before leaving the area he stated to an international activist that one border police officer kicked and slapped him during his detention. The remaining youth were transferred to Kiryat Arba police station and their situation is now unknown.

Children and youth are regularly harassed at checkpoint 29, often whilst on their way to school in the morning. For example, this morning several children, some who were under the age of 12, threw stones at the checkpoint and Israeli forces responded by firing a tear gas grenade.