Yesterday, the village of Nabi Saleh held an event to commemorate the deaths of Mostafa and Rushdi Tamimi. It is the second year anniversary of the death of Mostafa who was killed during a demonstration. The 7th of December also marks 26 years since the beginning of the first intifada.

In addition to the weekly Friday demonstrations that are held throughout the West Bank, the popular committees also started having events on Saturdays, which will be followed by a demonstration in one village once a month. Yesterday in Nabi Saleh was the first of these events.Hundreds of people came together in the village square, where speeches and performances were held.The event ended with a dance performed by the youth. After that several hundred people marched to the army tower at the entrance of Nabi Saleh. Before even reaching the tower the army shot lots of tear gas canisters at the approaching protesters. Even though many people suffered from heavy tear gas inhalation, it did not prevent them from trying to get to the tower again. Demonstrators successfully reached the yellow gate which blocks access to the village from one side; several people went in front of it. The soldiers initially detained three people; one Palestinian, one Israeli and one international. They were all released after a short while. The soldiers made several further attempts to arrest Palestinians and internationals, all of which were prevented by the protesters. 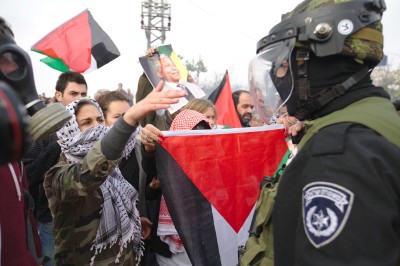 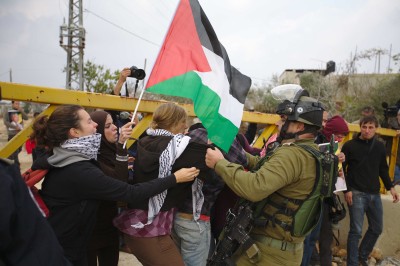 Israeli army is trying to arrest demonstrators, which was successfully prevented.
Photo by Thomas Severe

Meanwhile, Palestinian youth were throwing stones at soldiers and jeeps in the field, who responded with tear gas and rubber coated steel bullets. Mustafa Tamimi’s brother was shot in face, resulting in the breaking of his jaw. 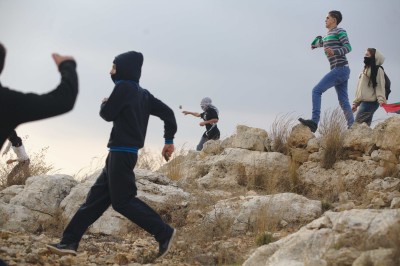 Youth are throwing stones at the soldiers and the police.
Photo by Thomas Severe

The group in front of the yellow gate moved on together, blocking the army jeeps which were exiting the village.After protesters were forcefully removed they tried to reach the spring, which has been stolen by the settlers from the nearby illegal Settlement of Halamish.The army prevented this by attacking the protesters with more tear gas and rubber coated steel bullets. Soldiers were pushing them back into the village where the demonstration ended. The whole event lasted for about five hours, with one person being hospitalized and many others injured. 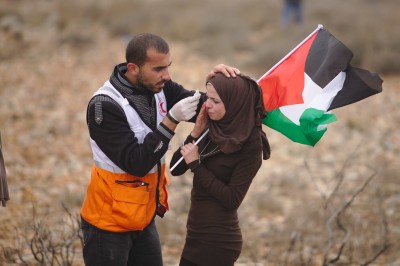 A women is being treated after suffering from tear gas inhalation.
Photo by Thomas Severe