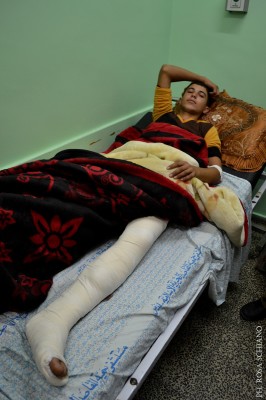 On Sunday, 15th December, a young Palestinian was injured by Israeli gunfire in Beit Lahia in the northern Gaza Strip.

Mohammed el-Shanbary, age 17, was harvesting potatoes. “I went to work at 9 am,” el-Shanbary said. “After about 30 minutes, the soldiers started shooting.”

He was working with the owner of the land and another person about 500 meters from the wall that separates the Gaza Strip from territory occupied by Israel in 1948.

El-Shanbary and his father Rafiq think the bullets were fired from control towers situated along the separation barrier, inside of which there are automatic machine guns.

A bullet wounded El-Shanbary in his left shinbone. After he fainted, the landowner called his father and asked him to summon an ambulance. The ambulance took him to Kamal Odwan hospital.

The bullet entered and exited, causing a fracture. El-Shanbary would have surgery 30 minutes after our visit. The doctor said they would insert a tibial fixation.

El-Shanbary started working in the area one month ago. The work depends on the harvest season.

His father does not have a stable job, leaving el-Shanbary and his 21-year-old brother to work to support a family of ten.

He can earn from 25 to 40 shekels per day, depending on how many crates of potatoes he collects. For each crate, he receives two shekels.

“Some time ago, they were shooting just to scare us, not directly at our bodies,” el-Shanbary said.

“We work just to buy bread for our family, and they hit us,” his father Rafiq added.