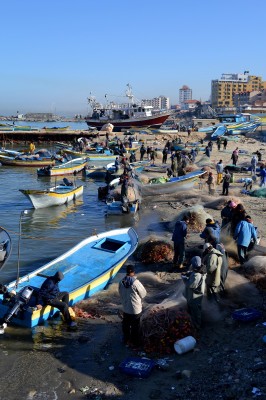 Fisherman and their boats in the Gaza seaport. (Photo by Rosa Schiano)

In the tent were fishermen, international and Palestinian activists for the rights of fishermen and political prisoners, and representatives of human rights centers. Politicians came to give their greetings and express solidarity with the fishermen.

“Since last year, massive attacks against Palestinian fishermen have become a practice of the Israeli naval forces,” said Khalil Shaheen, director of the economics and social rights unit at the Palestinian Centre for Human Rights. “The attack on the fundamental rights of the fishermen, their livelihoods, makes the lives of thousands of fishermen impossible. From September 2009 until the current day, two Palestinian fishermen have been killed, 24 injured, at least 150 arrested, 49 boats seized by the Israeli forces, and at least 120 boats destroyed partially or totally, including during the last military operation, Pillar of Defense, in which harbors were also bombed.”

“Palestinian fishermen are losing 85% of their annual income due to the restrictions in the maritime area and the naval blockade,” Shaheen added. “I think it’s very important to send a clear message in support of the fishermen. For Christmas and the New Year, Palestinian fishermen ask their friends and brothers in the rest of the world to convince the Israeli occupation to end the illegal blockade in Gaza, and to free the Holy Land sea, to grant them their rights.” 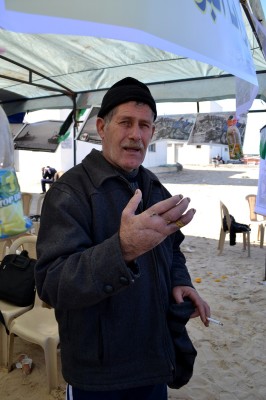 Among the fishermen present at the event, Salim al-Faseh, age 57, was wounded by Israeli military fire in September while fishing on a trawler about six miles offshore. The bullets severed the little finger of his right hand and destroyed part of the internal tissue. Salim will have to wait for his surgery in February, when an internal fixator will be removed, to know if he can use his fingers again. “God willing, this event will help the fishermen,” al-Faseh said.

“The fishing sector is the sector that suffers the most in Gaza,” he added. “We suffer from lack of fuel, the limits imposed on the fishing area, the unsuitable materials. Everything is making the profession of fishing die.”

The port was calm under a blue sky. After the raging storm and incessant rain that flooded roads and houses in the Gaza Strip, the sun was shining again. Some fishermen were harvesting small fish from their nets. Others sat under the sun and spoke of their daily problems, especially the economic difficulties faced by Gaza fishermen.

Israel has progressively restricted Palestinian fishermen’s access to the sea. The 20 nautical miles established under the Gaza-Jericho Agreement between Israel and the Palestine Liberation Organization (PLO) in 1994 were reduced to 12 miles in the Bertini Agreement of 2002. In 2006, the area Israel allowed for fishing was reduced to six nautical miles from the coast. After its “Operation Cast Lead” military offensive (December 2008 – January 2009) Israel imposed a limit of three nautical miles from the coast, preventing Palestinians from accessing 85% of the water to which they are entitled under the Gaza-Jericho Agreement.

Under the ceasefire agreement by Israel and the Palestinian resistance after the Israeli “Operation Pillar of Defense” military offensive (November 2012), Israel agreed that Palestinian fishermen could again sail six nautical miles from the coast. Despite these agreements, the Israeli navy has not stopped its attacks on fishermen, even within this limit. In March 2013, Israel once again imposed a limit of three nautical miles from the coast. On 22 May, Israeli military authorities announced a decision to restore the limit to six nautical miles.

In the month of November alone, PCHR reports 12 attacks. During one, gunfire injured a fisherman. Overall six fishermen were arrested and six boats confiscated. These attacks constitute a violation of the international humanitarian law.

At the end of the event, fishermen, along with human rights organizations, submitted a letter to the United Nations Special Coordinator for the Middle East Peace Process office in Gaza City. 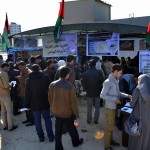 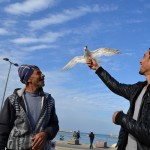