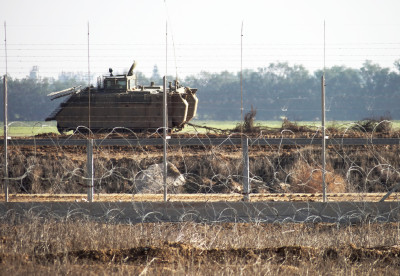 An Israeli military vehicle by the separation barrier near Khuza’a. (Photo by Silvia Todeschini)

Early on the afternoon on Friday, 20th December, Israeli occupation forces killed a 27-year-old Palestinian, Odah Jihad Hamad, and wounded his brother Raddad, age 22, north of Beit Hanoun in the northern Gaza Strip. The Palestinian Center for Human Rights reports that Israeli forces fired directly at them, although it was clear that the two civilians were collecting steel and plastic from the landfill near the separation barrier. “According to the testimony given by Raddad Hamad to PCHR, at approximately 12:00 on Friday, 20 December 2013, Raddad went with his brother ‘Odah to the landfill near the border area, east of Beit Hanoun, in order to collect plastics and steels for livelihood. At approximately 15:30, when the area was very calm, Israeli forces stationed at the borderline opened fire at them without any prior warning. As a result, Odah was wounded by a bullet to the head and fell onto the ground while Raddad was hiding in a low area. Raddad tried to reach his brother to rescue him, but Israeli forces opened fire at him to wound him by a bullet to the right hand. He immediately fled and managed to call the Palestine Red Crescent Society to send him an ambulance. The ambulance was delayed by Israeli forces till at approximately 16:15 when it obtained coordination through the International Committee of the Red Cross. The ambulance staff searched for ‘Odah to find him wounded and then transferred him to the Beit Hanoun Governmental Hospital. He was entered into the Intensive Care Unit, but a few minutes later, he was pronounced dead.”

Raddad said the ambulance found the body of his brother in another place closer to barrier. Israeli soldiers probably took him, to check if he was alive, then left his body there.

“He was just trying to eke out a living,” his mother said in the morning tent. “He wanted to earn some money to buy wood for our house, because the cooking gas finished,” one of his brothers said. To find cooking gas in Gaza is almost impossible now due to restrictions on imports and the closure of the tunnels.

Hammouda works in a coal shop near the cemetery. He said he finished his shift and was walking away when he saw a group of men close to his shop. As he asked them to go away, Israeli soldiers started shooting. The shop is next to the barrier. Youth go there to throw stones at the soldiers, especially on Fridays. The Israeli forces begin to shoot without hesitation. Young Palestinians are injured so every week or two in this area. Hammounda worried that the youths near the store wanted to through stones, so he asked them to leave the area.

A bullet struck Hammouda in his right leg. The youths ran away. He lay on the ground 15 minutes before someone came to help him. An ambulance could not reach him, so a young man on a motorcycle carried him to one waiting near Abu Baker mosque. The shop where Hammouda works is 600 meters from the fence. He thinks that the shots came from one of the control towers placed along the border, in which there are automated machine guns. 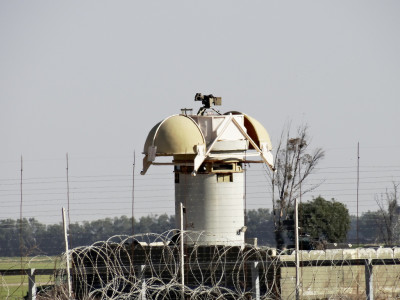 An Israeli control tower by the separation barrier near Khuza’a. (Photo by Silvia Todeschini)

The bullet that the doctors extracted from Hammouda’s leg during surgery is a 250 mm projectile. The bullet caused a fracture. The doctors have placed an external fixator in his limb. He will keep it for six months.

Hammouda’s family, from the Jabaliya refugee camp, has eleven members. He is the only one with a stable job. His father works occasionally. He  earned 30 shekels, about six Euros or eight US dollars, a day. He said he would accept any salary because of unemployment.

The other two Palestinians suffered minor injuries in their lower limbs and were released from the hospital.

On the afternoon of the same day, two men were injured east of Khuza’a in the south of the Gaza Strip. Omar Sobh Qudaih, age 21, and Abdul Halim Alnaqa, age 23, were transported to the European hospital. Qudaih said that around 2:30 pm, they had been collecting beans about 500 meters from the fence. The bullet did not enter his limb. He suffered from superficial wound and needs antibiotics and dressing.

The following day, on Saturday, 21sr December, at about 7:30 am, Israeli soldiers fired at farmers and workers near the barrier Khuza’a. Ismael al-Najjar, a 21-year-old farmer, was wounded in his leg.

Al-Najjar thinks that the bullets were fired from control towers. He said he was with two other workers at about 600 meters from the barrier, and that he had been walking toward his chicken farm. He suffered from a superficial wound. A nurse said his condition is stable.

On Tuesday, 24th December, Israeli forces carried out a series of airstrikes hitting different locations in the Gaza Strip, and shelled different areas along the barrier.

Earlier afternoon, a contractor of the Israeli occupation forces had been killed by a Palestinian resistance group east of Gaza City. Israeli authorities declared that they would respond harshly against Gaza. Shortly afterward, a Palestinian civilian was wounded by Israeli army fire in Beit Lahia, in the northern Gaza Strip. Government buildings were immediately evacuated.

Western media and others claiming the escalation began with the shooting of the military contractor should be reminded of the killing by Israeli forces of a young Palestinian collecting material from a landfill on Friday.

In the afternoon of 24th December, local sources reported two Palestinians had been killed, included a three-year-old child killed in a bombing of Maghazi in the center of the Gaza Strip. The number of injuries remains imprecise.

Shortly after the shooting of the contractor, Israeli forces reported they had killed a Palestinian along the northern barrier around the Gaza Strip, as Palestinian sources also did later. It later became clear the Israeli army had opened fire at a large tortoise moving slowly along the barrier. Its large size, and its bloodshed after an Israeli missile, led some to speak of a martyr. The occupation hits anything moving along the barrier, including a rare breed of giant tortoise.

In the morgue of al-Aqsa Martyrs Hospital, where members of the Abu Sbeikha family were hospitalized, her face was stained with blood.

Members of her family in the hospital included Busaina Abu Sbeikha, 27 years old, and the two wounded children.

“I had gone to visit them and we were seated on the first floor of the house,” an aunt said. “Two bombs fell in few seconds. It was about 3:30 to 4:00 pm. After the second bomb, we climbed to the second floor, where there our children, about ten of them, were. Busaina, with her children, was also there, helping them to study. We found Hala dead. Then we left the house, and a third bomb struck the two-story building, almost completely destroying it. Even the houses nearby were damaged by the bombing. ”

Women from the family told us that it is the first time that their house, in which 30 people lived, had been hit. “Even during the two wars, they never struck us or asked us to evacuate,” they said. Their house is located about 700 meters from the separation barrier east of Maghazi, in an area called Beheiri in the central Gaza Strip. It is a very quiet area.

“The Israelis said they had hit a site of the Palestinian resistance, but it is not true.” No resistance activity had been present in the area, they said.

Busaina Abu Sbeikha has undergone surgery for a shrapnel injury. Her children Belal and Mohammed lay on a bed in the same hospital room. Mohammed was almost asleep because of the painkillers, while Belal’s eyes were wide. He had no reaction when his his face and hair were caressed. Both children were injured by shrapnel.

Al-Aqsa Martyrs hospital received around nine injured civilians that evening, in addition to the dead child.