Gaza’s bad weather has disrupted access lines and flooded whole areas. Thousands of families have been evacuated. Numerous injuries and two deaths have been reported. The Zionist siege and occupation contribute to aggravating the situation for tens of thousands of people.

The main route of access between the north and south of the Gaza Strip, called Saladin Street has been flooded, making travel very difficuly. A microbus running from Gaza to Rafah must be able to avoid deep pools of water by going from one lane to another, slowly and laboriously climbing over the hedge that separates them. Some cars are blocked because the water is high enough to disable their engines. Carts are pulled by donkeys, who walk with their feet in the water. 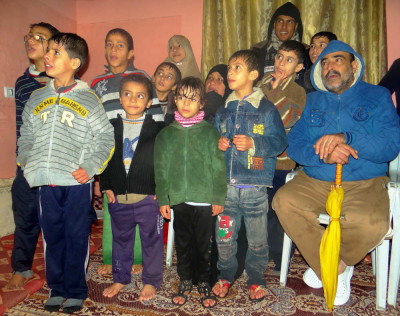 The neighborhood of Rafah where Khaled el- Sadi Alul lives is called el- Madakha. He lives with three wives, eleven sons and six daughters in a house that is cold and wet. You can see your own breath. The veil Khaled’s first wife wears seems to smoke because it is damp, and body heat causes its moisture to evaporate.

The woman is particularly sensitive to the cold, because she suffers from asthma and is diabetic. Khaled should also avoid low temperatures, because two weeks ago, pruning a tree, he fell down broke a rib. It puncture his lung, which required a surgery to drain the blood from it. Some of the windows and the roof of the house were destroyed during Israel’s “Operation Cast Leas” military offensive. The roof has been replaced with a sheet of corrugated material which costs little, but contains carcinogenic asbestos.

Khaled says that that at midnight between Thursday and Friday, everyone was at home asleep . They had heard rain, but it did not look heavy, and there was no electricity, so they were in darkness. Sleeping on the floor, they woke up because their mattress was wet. The water came five centimeters above the mattress. They called Civil Defense, but were told the whole Gaza Strip was in a flood emergency, so nothing could be done. 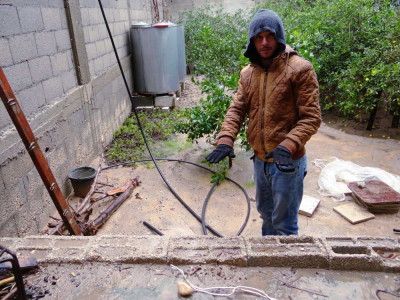 They called the 109. The municipality said it would send a car, but it never arrived. The water that had invaded was sewer. They had to place a pipe out of the home, to ensure that water poured into the yard. Then they had to make a hole in the wall that separates the garden from the space in front of the kitchen door, to let it drain, all in the dark and without power. “We spent horrible hours,” says Khaled ‘s first wife “In three hours we emptied the water that had accumulated in the house with buckets. You can still feel the smell!”

This family is just one example of what bad weather means here in Gaza, and certainly not the worst case. “We pray Allah to end the siege,” Khaled said. “If we had electricity, when something like this happens, at least we could see and understand what is going on.”

For five days, Khaled’s sons have not attended school because it is also flooded. Or perhaps it would be better to say that a lake has formed around it and the school seems to float in it, making it accessible only by boat. Even the football field in front of the school looks like a rectangular lake. A few days ago, water reached the first floors of the houses, and ten families, of a total of 70-80 people, were evacuated by boat through the first floor windows of their homes. Some were taken on Friday evening,, others Thursday morning, to a nearby school that serves as a shelter. But they are not isolated cases. 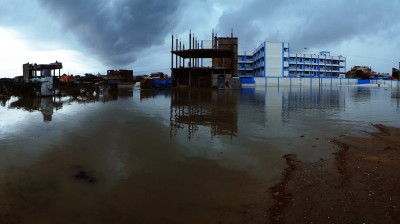 In the Jabalia refugee camp, which lies at a low point in the north of Gaza, a young man on the street reported that one man had died from the fatal mixture of broken electricity wires and water in the streets. Boys said that last year, three people and one horse were killed the same way: an electrical wire broke and fell into knee-high sewage water, which the wastewater plant and pumps couldn’t move out of city.

Yusuf Khela, manager of the Jabalia municipality, says that two projects have been underway. One project would pump water
directly to the to the wastewater plant further north without passing the sewage treatment plant in Jabalia. To manage this, it would be necessary to pump 3000qm3/h, but because of the fuel shortage, it is often difficult to manage these. The municipality installed two pumps in case one runs out of fuel, to guarantee at least some pumping of water. 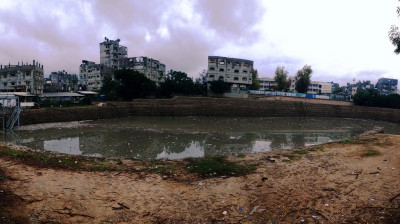 Even if there is fuel, it will be expensive, costing 7 NIS per liter. To afford these, the government is even cutting employees’ salaries in order to fuel the pumps. If they stop working, the rain, salt and sewage water mixing together, particularly during the heaviest rain in decades, would first flood all of Jabalia camp.

A second project to manage the camp’s water problems is an infiltration system. Khela says that sometimes UNRWA gives money to cover the coast of fuel for Jabalia camp, if it is not stopped at the separation barrier.

Each year a large amount of NGOs and UN organisations give money in order to supply the fuel and the basic needs of Palestinian people. Unfortunately, it is often not used to meet these needs. Streets gets bigger, even if this means cutting parts from the surrounding houses. But projects like solutions for sewage water in  Jabalia camp are set up only after deaths are reported.

Most houses are accessible only by stairs  in order to prevent the entry of water. The poorest houses, covered only by thin metal roofs, suffer the most. Heavy winter storms often carry these makeshift roofs away. On 11th December, a young girl died in Khan Younis after one struck her in heavy winds.