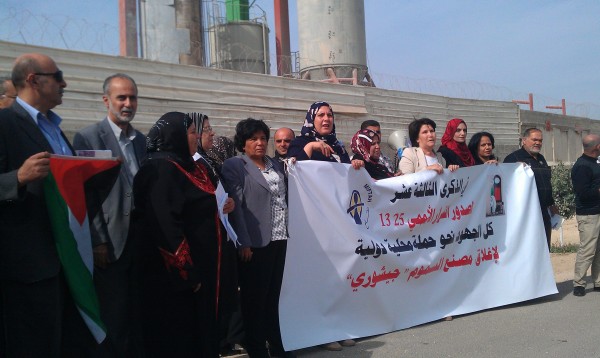 On the 4th of November, associations, officials and activists protested against the chemical factories that sicken the population of Tulkarem.

The construction of Israeli factories on Palestinian land near Tulkarem started in 1987. At the time locals were told these installations were a good will gesture that would provide employment.

26 years later the women’s group MIFTAH, surrounded by speakers from the Palestinian Government, Ministry of Health and local campaigners raised concerns about the high rates of cancer, respiratory diseases and skin ailments close to the factories. All of them condemned the factories.

It was reported that the factories do not operate when east winds would carry the fumes into Israel and that toxic waste had been buried on agricultural land in a nearby Palestinian village.

International activists then joined a protest march to the high wire topped wall that marks the boundary to the industrial complex.

The protest passed peacefully without the security forces attending.