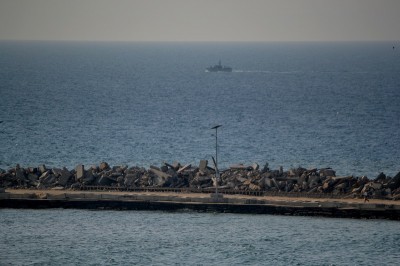 On the morning of Sunday, 10th November, brothers Saddam Abu Warda (age 23) and Mahmoud Abu Warda (age 18) were captured by the Israeli navy in Palestinian waters off the Gaza Strip. They were released later in the evening and their boat was confiscated.  Mahmoud was injured by a bullet in the right side of his abdomen.

We went to visit the two young fishermen in their home in the town of Jabaliya, in the northern Gaza Strip.

In the absence of electricity, the house was dark like most homes in Gaza Strip, which is stifled by the siege and a severe fuel crisis. Without electricity, water could not reach the house’s plumbing system.

“We cast our nets into the sea at a distance of about 500 meters from the forbidden fishing area,” Saddam told us. “We were far away from the Israeli gunboats.” The two fishermen were on a small boat, or hasaka, without an engine.

Saddam told us that an Israeli gunboat approached their boat. The soldiers shouted for them to leave in less than five minutes. “We had to cut our nets in order to flee,” Saddam said. “The soldiers came closer to us and started shooting at our boat.”

Without a motor, the two fishermen could not escape. The Israeli soldiers ordered the two fishermen to undress and jump into the water. Meanwhile, they continued to open the fire. “I was shocked,” Saddam said. “I could not move. They were shooting, and I thought I would be killed.”

As we listened to Saddam, F-16 fighter jets rumbled overhead at low altitudes, a constant threat in the darkness.

“I shouted, asking the soldiers to stop shooting and save our lives,” Saddam said. According to him, another Israeli gunboat reached them and attacked the fishermen using water cannons. The two fishermen jumped into the water. “Three Israeli gunboats surrounded us, our boat was now far away, and the water was cold,” he added.  The soldiers told them to swim to the forbidden maritime area. “I was scared. My brother was away from me, and the soldiers kept firing. He was wounded. He could not swim. I reached him to save him. His blood was everywhere in the sea. Two Israeli dinghies reached us. The soldiers took my brother Mahmoud and closed his wound to stop the bleeding. They didn’t take me, too. They left me in the water. They told me to swim the marker that delimits the maritime area allowed by Israel, then took me. They covered my head. I could not see anything. They pointed a gun at my head and cuffed my hands and feet. They hit me, kicking me on the back. Then I fainted for about an hour. I don’t remember anything more.” 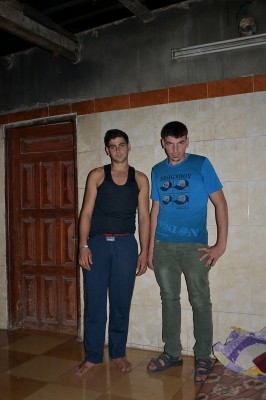 The two fishermen were transported to a medical center in the port of Ashdod. “When I woke up, I saw my brother beside me,” Saddam said. “Two soldiers then took me to a special room and interrogated me. They asked me why we were fishing in the forbidden area. I told them that we were 500 meters away from the limit, and that the soldiers forced us to swim until we reached it. An investigator asked me how my brother was wounded, since it was not by the Israeli soldiers. I told him my brother was wounded by Israeli gunfire. The investigator tried to convince me that Mahmoud was not wounded by the soldiers. Then I told him  that three Israeli gunboats were shooting over our heads and my brother’s blood was everywhere in the sea”.

The investigators then showed Saddam a map on a laptop, placing their boat in the forbidden maritime area. Investigators interrogated the two fishermen individually. Afterwards, the two brothers were detained in another room, and at the end of the day, were transferred to Erez, where they received another interrogation. “They asked me about my family, my neighbors, fishermen, and every detail of my life,” said Saddam. “Then they showed me a map and asked me about every house around my home. They also asked me how many boats I had.”

The Israeli port of Ashdod now holds three boats belonging to Saddam’s family. In the past, in fact, other members of the Abu Warda family had been arrested and seen their boats confiscated. Now they have none left.

After interrogation, the fishermen were detained in a cell for two hours before being released through the Erez checkpoint later in the evening.

Saddam’s family has 15 members. Fishing is their only source of livelihood. The other eight brothers are also fishermen. They don’t have any other source of income, and they don’t believe they will get their boats back.

Mahmoud showed us the wound on the right side of his abdomen. The bullet did not enter his body, but  brushed it.  Doctors in the Ashdod medical center closed his wound with two stitches. Mahmoud also told us of the physical and verbal abuse he received from Israeli soldiers. We asked him if he will return to fishing. “Of course,” he said. “We have no choice. We have to face the danger.”

What its fishermen earn only allows the Abu Warda family to survive. Sometimes, they return home without anything. Other times, what they earn only covers the cost of fuel.

The fishermen told us that they would like more support from the international associations, especially when they are in the north of the Gaza strip. There, attacks are more frequent and the majority of confiscated boats have been lost.

We continue to hope that one day the international community will break its silence and force Israel to stop attacking Gaza fishermen, and to release all their boats it has confiscated.

Under the ceasefire agreement reached by Israel and the Palestinian resistance after the Israeli military offensive “Operation Pillar of Defense” (November 2012),  Israel agreed that Palestinian fishermen could again sail six nautical miles from the coast. Despite these agreements, the Israeli navy has not stopped its attacks on fishermen, even within this limit. In March 2013, Israel once again imposed a limit of three nautical miles from the coast. On 22 May, Israeli military authorities announced a decision to extend the limit to six nautical miles again.