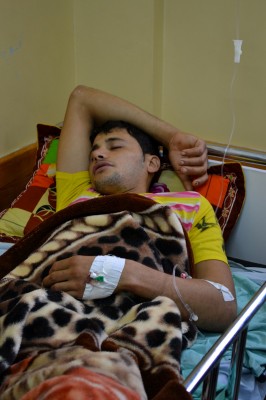 On the afternoon of Friday, 22th November 2013, Mohammed Adel Afana, age 22, was injured by Israeli gunfire east of the Jabaliya refugee camp in the northern Gaza Strip.

Adel Afana had gone there with friends. Each Friday, many Palestinians go to the cemetery, which is located about 300 meters from the fence that separates the Gaza Strip from territory occupied by Israel in 1948.

It was between 3:30 and 4:00 pm. Some youths began to throw stones at Israeli soldiers. Adel Afana joined them. In the hospital, he said there had been three Israeli jeeps and about 10 soldiers. A soldier shot his right thigh. The bullet entered and exited, but cut the nerves and left shrapnel inside the limb.

The young men with him called an ambulance. It transported Adel Afana to Kamal Odwan hospital in Jabalia. He was later transferred to the Beit Hanoun hospital for surgery. There doctors removed the shrapnel from his leg and cleaned the still-open wound.

Adel Afana will probably need another surgery due to the severed nerves. Before the interviewed ended, he was transferred to Kamal Odwan hospital again.

He works in a bakery. His family is has 10 members.

Adel Afana was previously wounded on 30th March 2012, Land Day, during the Global March to Jerusalem at the Erez checkpoint in Beit Hanoun. It was a bloody day, with Israeli soldiers targeting and shooting the arms and legs of young protesters. Mahmoud Zaqout, age 19, was killed by a bullet to his chest.

Adel Afana says he was shot in his his right thigh, the same place he was injured on Friday.

In addition, one of his brothers was wounded during Israel’s “Operation Cast Lead” military offensive against the Gaza Strip in 2008-2009. One of his legs was amputated.

“All the gunshot wounds caused by the Israeli army are in sensitive areas of the body,” said Dr. Fayez al-Barrawi in Beit Hanoun hospital. “I have 17 years’ experience in surgery at many hospitals. Most wounds are in the head, chest and legs. More than 95% of them have no hope of cure, even abroad.”

“There is not much hope of recovery,” Dr. al-Barrawi said of Adel Afana’s wound. “It is difficult to reconnect nerves and bring the situation to what it was before.” 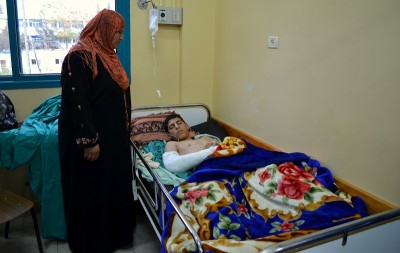 Hamada Suleiman al-Barrawi with his mother. (Photo by Rosa Schiano)

The second injured patient lay in the same hospital room as Adel Afana. Hamada Suleiman al-Barrawi, age 15, complained of pain, despite the administration of analgesics.

Hamada saw Adel Afana’s injury. In hysterics, and near a nervous breakdown, he began running aimlessly until he fell. The fall has fractured his right arm and some veins. He already underwent one surgery and will face another.

Hamada already experienced a tragic story. His cousin Bilal al-Barrawi, age 20, was killed by Israeli forces in November, during their “Operation Pillar of Defense” military offensive. When Hamada saw his body, he began having hysterical reaction to the sight of injuries. He doesn’t control his movement and his memory is affected. A doctor said his case is difficult due to the rupture of his veins.