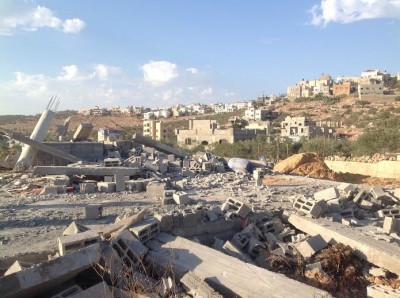 The demolished house (photo by ISM).

On Thursday morning at five am, the Israeli army demolished a house under construction, and left the area before the owner Ghaneem Mahmoud Abdullah Al-Karim or other villagers were able to arrive at the scene. It is believed that the Israeli forces conduct these activities so early in the morning in order to avoid nonviolent resistance from the villagers. This was the first house to be demolished in Deir Ballut but there are over sixty houses that have been served demolition orders from the Israeli army.

The village is over five hundred years old, and within the Oslo Agreements the village was literally split between Area B and Area C. There are over a hundred and eighty houses that now fall within Area C and therefore are under threat of demolition. The inhabitants of Area C need permission from the Israeli government to even refurbish their houses, which is often impossible to get. 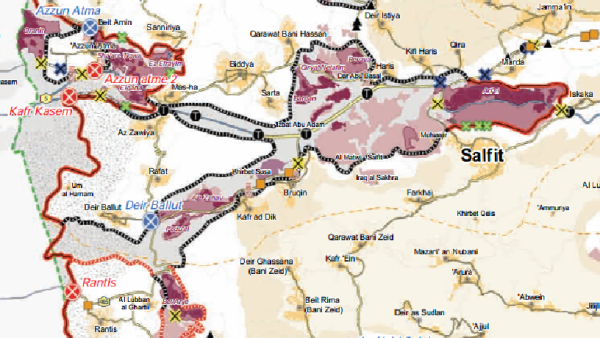 Deir Ballut (to the left of the map) is in risk of being surrounded by the annexation wall. The red line is the wall today while the black marks the planned route (source: OCHA).

The majority of Deir Ballut, as with other villages in the area, is classified as Area C and is controlled by the occupation forces. Many villages in the Salfit area have lost land to settlement and to the construction of the separation wall. Deir Ballut has lost 2,000 dunums which was confiscated when Israel built the Apartheid Wall, and the intended reassignment of the Wall which is to be carried out in coming years will mean that the village will lose even more land and is surrounded by the wall.

As Deir Ballut’s population increases, families are forced to build in Area C, as is the case for the Al Karim family. The villagers are committed to continue constructing homes on their land, and to help Ghaneem and his family to rebuild their house.