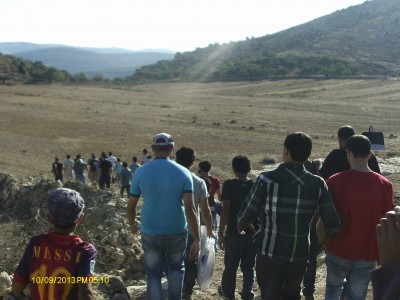 Protesters marching towards the road (Photo by ISM)

Update 11th September: Abdallah Abu Rahmah was released at around 10pm last night. Bashar Qaryouti and Salah al-Khawaja have also been released. Bashar has needed medical attention after being beaten during his arrest.

Three Palestinian activists have been arrested today related to a demonstration against a road block in the northern West Bank village of Qaryut.

More than 150 Palestinians participated in the protest marching from the village towards Road 60, connecting Ramallah to Nablus. As a group of protesters were approaching the road, two military jeeps blocked them, throwing stun grenades and shooting tear gas canisters. Israeli soldiers arrested two activists, Bashar Qaryouti and Salah al-Khawaja and beat others as they attempted to arrest more. Soldiers pursued activists from the road from many different directions and came through the olive trees trying to trap activists, shooting many teargas canisters.

More soldiers arrived in twelve military jeeps and fired teargas at demonstrators who had moved back to the hill. The soldiers occasionally moved forward but mainly stayed positioned by the road. Many demonstrators suffered from tear gas inhalation and three were treated by medical personnel in the field. The demonstrators withdrew at 7pm. 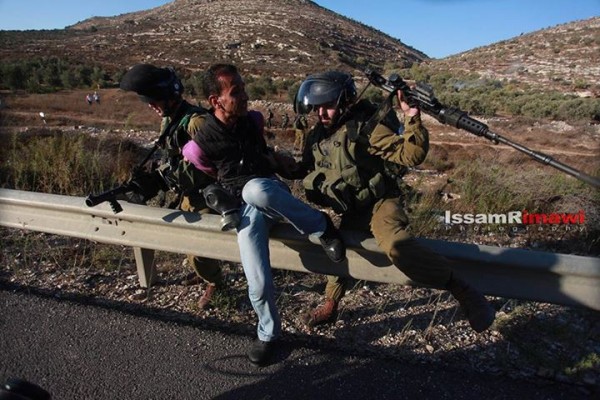 A flying checkpoint was set up on the road from Ramallah to Qaryout and Abdallah Abu Rahmah, a prominent Palestinian activist was arrested. Soldiers approached the car with a list containing the names and ID numbers of three local activists. Abu Rahmah was handcuffed and detained for forty-five minutes until the Israeli police arrested him.