Sukkot is a joyful festival in Judaism; however its impact upon day-to-day life in Khalil has only caused greater problems for the Palestinians. Many residents of Khalil have commented that it is during this holiday period every year where daily life in the city becomes all the more difficult.

Last week soldiers began preparations for taking over a house next to the container checkpoint 209 (Quatoum/Abu Rish), which belongs to a Palestinian family. The family received a military order informing them that this house would be occupied by the Israeli army until Tuesday 24th September, the end of Sukkot. Due to the large number of Jewish tourists visiting Hebron during Sukkot, reinforcement brigades have been sent to Hebron, and due to lack of accommodation for these additional soldiers, the army decided to take over this Palestinian house and use it as a military base for the duration of the holiday. Residents of this area have stated that since the soldiers began occupying the house, child detainments and arrests have increased, and there are further concerns that checkpoint 209 may be moved in an attempt to increase control in the surrounding area.

Today, Saturday 21st September, several clashes and attacks took place between settler youth and Palestinian children and teenagers in Tel Rumeida. Additionally, as on every Shabbat, settlers invaded the roof of the Abu Shamsiyeh family and verbally attacked international activists who, at the request of the family, were monitoring the entrance to the roof as it is often entered without family permission. In the past, settlers have attacked the family by throwing stones, spitting at, beating members of the family and urinating into their garden.

On Friday 20th September, clashes erupted in the afternoon as Palestinian youths threw stones at checkpoint 56. After the PA (responsible for this area of Hebron which is part of H1) chased away the stone-throwers, the clashes moved into the OldCity and souq of Hebron, which is part of H2 and thus under Israeli military control. Throughout Friday evening and most of Saturday, Palestinian youths were throwing stones and Molotov cocktails, whilst Israeli soldiers responded with sound grenades, teargas and rubber-coated steel bullets. International activists witnessed border police shooting teargas canisters directly at protesters, as opposed to shooting it in an arch as they are supposed to under Israeli army regulations. Further clashes are expected tomorrow as settlers and Jewish tourists invade area H1.

On Sunday 22nd and Monday 23rd September, tens of thousands of Jewish tourists are expected to descend upon Hebron for Sukkot celebrations. On important Jewish holidays, there is a tradition of the settler community, alongside Jewish tourists, visiting a house in H1 (the Palestinian-controlled part of Hebron) which they claim used to be the home of a rabbi and thus holds religious significance. The Israeli military has ordered the closure of the road outside checkpoint 56 leading to Yatta between 10am and 3pm on Sunday 22nd September. The house that the settlers and Jewish tourists pilgrim to is located on said road, however it is the first time ever that the Israeli military has formally ordered the closure of the road and the shops located there. This order is a clear violation of the Hebron Agreement, signed in 1997 by the Palestinian Authority and the Israeli government, which divided the city into areas H1 and H2 under Palestinian and Israeli military control respectively. 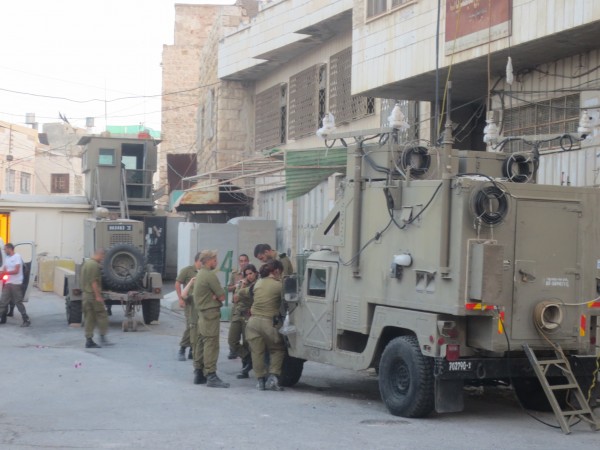