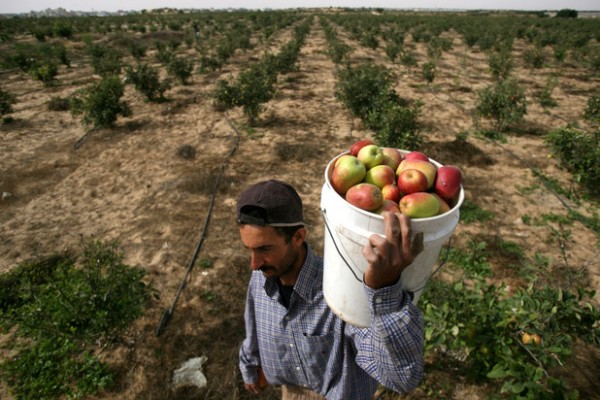 Israel continues to violate the terms of a 2012 ceasefire by attacking farmers in Gaza. (Eyad Al Baba / APA images)

Farming in the Gaza Strip’s “buffer zone” is hazardous under the best circumstances. Israeli troops routinely shoot live ammunition at Palestinian farmers in the free-fire area, which stretches hundreds of meters into the besieged territory from the barrier separating it and Israel, and invade their fields with tanks and bulldozers.

But Israel’s aggression against civilians in the area has escalated since the Egyptian army deposed elected president Muhammad Morsi and installed a new government on 3 July, according to Gaza’s farmers.

“After the coup in Egypt, the Israelis began shooting more heavily,” said Abu Jamal Abu Taima, a farmer in Khuzaa, a village in the Khan Younis area of southern Gaza.

Abu Jamal is the mukhtar, or elected leader, of the Abu Taima family, 3,500 refugees fromBir al-Saba — a town in present-day Israel called Beersheva — now scattered among the farmlands outside Khan Younis.

He and two dozen other farmers from the family spoke to The Electronic Intifada during and after a meeting they held in Khuzaa.

“Egypt was the guarantor of the last ceasefire agreement [in 2012],” he said. “Now the Israelis are free to do whatever they want.”

“Just a few months ago, there was no gunfire. Now there is. We aren’t even in season yet, but they have already started to shoot.”

Morsi’s government brokered a ceasefire between Israel and Palestinian resistance groups on 21 November last year, ending eight days of Israeli strikes on the Gaza Strip and retaliatory fire from groups in the territory.

As part of the agreement, Israel reduced the “buffer zone,” which it had imposed in 2005, from 300 meters to 100 meters, according to the the Israeli military’s civil administrative unit, COGAT.

In May this year, following months of conflicting claims about the size of the area by COGAT and the Israeli military’s spokesperson, COGAT stated that the “buffer zone” remained at 300 meters (“IDF: ‘Forbidden zone’ in Gaza three times larger than previously stated,” +972 Magazine, 12 May 2013).

But farmers say Israeli gunfire has extended the zone even further.

“According to the ceasefire, farmers could reach nearly all their lands,” Abu Jamal Abu Taima said. “These days, the Israelis are shooting farmers at 500 meters [from the boundary].”

He is not the only farmer who attributes the shift to turmoil in Egypt.

“After the coup, the Israelis expanded the area farmers couldn’t reach to 500 meters,” Abed al-Rasoul Abu Taima said. “Anyone coming closer to the separation barrier will be shot.”

Other farmers say they have been targeted even further from the barrier.

“The Israelis shot at me at 800 meters,” Zakaria Abu Taima said. “I was preparing to plant when they opened fire. I hid in an iron pipe, but the bullets came right through it.”

The Palestinian Centre for Human Rights (PCHR) documented one Israeli shelling attack, twelve shootings, and seven incursions — resulting in a death and seven injuries, including two children — in the “buffer zone” during July and August.

Since the beginning of September, Israeli forces have undertaken at least two further incursions to level farmland.

Many other attacks, especially shootings that do not result in deaths or injuries, are never reported, according to farmers.

“It’s curious now, when you are talking about these limited incursions,” said Khalil Shaheen, head of PCHR’s economic and social rights unit.

“Violations define the restricted area. Officially, according to COGAT, the de jure area is 300 meters. But de facto, it depends on the incursions.”

Israel’s attacks in the “buffer zone,” especially those beyond 300 meters, discourage farmers from growing trees or building structures, like electrical pumps or wells.

“They don’t allow farmers to plant trees or build infrastructure,” said Dr. Nabil Abu Shammala, director of policy and planning at the Palestinian ministry of agriculture and fisheries. “They claim this is for reasons of their security.

“Agricultural activities in this area face many kinds of risks. Farmers avoid it not only because of gunfire, but also the destruction of land and infrastructure,” he added.

Amid the current rise in Israeli attacks, the potential destruction of their land particularly worries Gaza’s farmers.

The threat of Israeli bulldozers leveling fields has convinced many to delay the start of their fall planting.

“We are afraid to reach our land because, after we plant, the Israelis may come and destroy everything,” explained Abdul Azia Mahmoud Abu Taima.

“It’s regular for the bulldozers to level our land every week,” said Abed el-Aziz Abu Taima. “No one can stop them.”

When asked about the bulldozers used to raze their fields, farmers described the distinctive triangular treads of Caterpillar’s weaponized D-9 bulldozers.

“Caterpillar is the main weapon of destruction for the Israelis in the ‘buffer zone,’” said PCHR’s Shaheen. “They haven’t changed their company policy, despite all the information they’ve been given on the use of their machines here.

“After the farmers heard that they could access their lands up to 100 meters, they planted them. Now they cannot reach them. They lost their harvest. Israeli bulldozers levelled it.

“It’s very important to show what Caterpillar is doing, and that they know what’s happening.”

Under current circumstances, farmers face a delayed season with heightened dangers and an uncertain outcome.

“We are waiting until November to begin planting,” Zakaria Abu Taima said. “Usually, we would have started by now.”

“Of course we will plant,” remarked Abu Jamal Abu Taima. “But before we harvest, the Israelis may come with their bulldozers.”