We had a meeting with some leaders in the Gaza commercial fishing industry, to hear their stories and see if or how we can assist them. 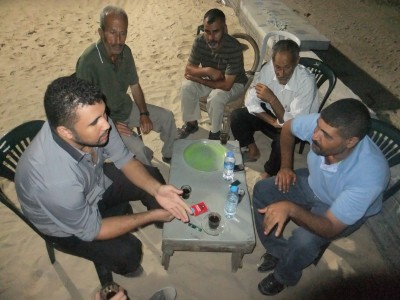 Gaza Strip fishers have historically been some of the poorest families here, especially as many are not refugees, and so do not receive UN assistance.  Their lot has been made that much worse with the attacks and restrictions imposed on them by the Israeli forces.  Since the July Egyptian coup, the Israelis have ignored the Nov 2012 ceasefire that was brokered by the previous Morsi Egyptian government.  There’s been a sad litany of recent violations against Palestinian fishers:

Even with all these provocations, the Gaza government is still striving to keep the ceasefire alive, going as far as to pass their own law, to arrest any fisher crossing the six-mile ceasefire limit.  And we activists have not been encouraged to accompany the fishers, in case our presence may encourage fishers to “push the envelope” and challenge the Israelis.

The trickle down effects of all this on fishing families eventually hits the youth the hardest, with no funds for education, clothing, proper nutrition and ultimately no next generation at all, as there is no work, accommodations or finances for young fishermen’s families to get started.

And the farmer’s lot is no better, as we found out at a recent meeting in Khan Younis, with farmers who own land close to the Israeli “buffer zone.” 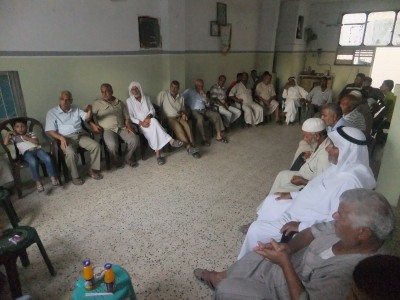 Even though it is time to plant, these farmers are not even attempting to approach their fields due to Israeli sniper fire.  The November cease fire, supposedly guaranteed that farmers could work their land, up to 100 meters from the border, but the Israelis only honored that for three months, and now shoot at farmers 800 meters from the border.  And even if they do manage to get plants in the ground, they cannot tend and water them due to the danger. Even if they could do this, the Israeli bulldozers and tanks are flagrantly crossing into the “buffer zone” and destroying their hard work in minutes. So now their plan is to wait until the fall rains come, so the crops will not need as much dangerous personal attention from the farmers, and ISM will be there, to at the very least, document any ceasefire violations.  But, at a minimum, three crucial months of farming some of the most productive land in Gaza, are being lost, in a country desperate for food.  And with the tunnels to Egypt now cut off, the Palestinians are left to buy overpriced, second-rate produce and junk food from Israel.

As well, they now have to buy Israeli fuel at double the cost of Egyptian tunnel fuel, so everything from taxi rides to the farms to bread for their families has gone up.  And Gaza is going from having power cuts of eight to twelve hours a day to only having power for 4 hours a day.  Besides the personal impossibilities of managing a household of refrigerators, freezers, well water pumps, washing machines, computers and such, on just four hours of electricity, think of the hospitals. The famous recent instance, of a Gaza doctor during a power outage completing an operation using the light of his cell phone, may soon not be so unusual.

It would seem the Israeli military is trying to goad Gaza into striking out at them, and then the “retaliatory” Israeli attacks would begin.  And then this one-way ceasefire would truly end, with rockets and missiles flying in both directions, and the Western media will suddenly, but belatedly, take notice of Gaza.  There is a desire for peace over here, if someone from the “outside” would just offer some support.