On the morning of the19th August, two hundred soldiers in thirty-eight jeeps and with two military dogs dismantled several tents housing the Tal ‘Adasa Bedouin community in the Jerusalem neighborhood of Beit Hanina. 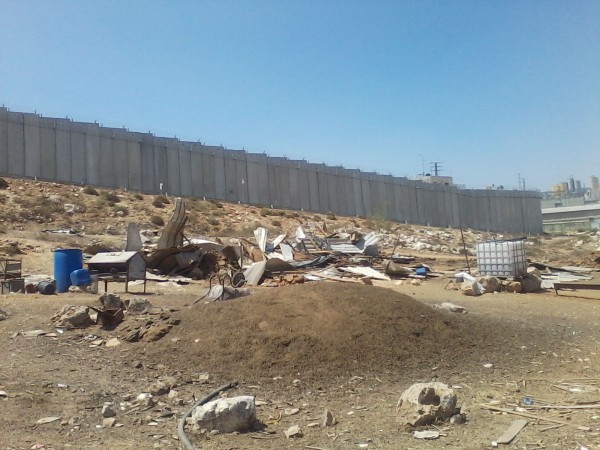 At around 6am, Israeli soldiers surrounded the Bedouins tents, pointing guns at the fifty-three residents, which includes twenty-eight children.  The family members were separated into three groups, always under the threat of guns, and were not allow to move for three hours. Children were not permitted to go to the bathroom nor to have anything to drink or eat.

At 9am, two armored bulldozers invaded the camp, destroying all the tents, animal facilities and furniture. The two military-trained dogs attacked the sheep and goats of the Bedouin, causing them to scatter all around. The Bedouins, worried about losing their flocks, ignored the soldiers orders and ran after them, managing to bring them back.

Three hours later, the soldiers left the area but before fining the community with 70,000 NIS for use of the bulldozers and – according to Israeli authorities – for illegally occupying the land. One of the eldest men of the community was told by Israeli soldiers that they have to clear the area within the next ten days, otherwise they will be arrested. 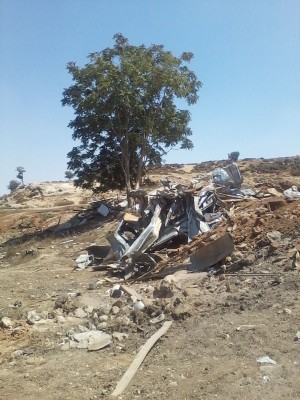 The Red Cross and Palestine Red Crescent personnel visited the community after the demolitions and provided the Bedouins with nine tents. However, when international activists visited the community, there were only twenty-eight people left. Most of the children were moved to Jericho where they won’t be able to continue their schooling as they are already registered in the schools located in Beit Hanina area.

Surrounded by mountains of rubble and damaged furniture piled up around the area Abo Hosean Kaabna stated; “We have been living in Beit Hanina for over 60 years, since 1948 after being forcibly displaced from Al Khalil during the Nakba in 1948”. “I have been taking care of that olive tree for 16 years”, continued with deep sorrow on his face and tears in his eyes, pointing out a large tree in front of him.

If the threats of the Israeli authorities are carried out, next Wednesday, the soldiers will go back and arrest the remaining Bedouins, as the community has no intention of leaving the area.

“Please, don’t forget us. This is not finished yet, we will have to face other problems later. Our community will have to look for another place to live but we don’t know where we could go and families will be forced to be separate again”, said Abu Hosean Kaabna.

This Bedouin community received a demolition order last June and since that time they have been expecting the order to be enforced, without knowing the exact date that their homes would be destroyed.

The Tal ‘Adasa Bedouin community has been living in Beit Hanina for over 50 years after being displaced from Hebron and Beer Seba areas during the 1948 Nakba. Despite living within the Jerusalem boundaries, residents of this community only hold West Bank IDs. In 2006, the Annexation Wall was constructed to the east and west of the community, isolating it from the rest of the West Bank. Israeli authorities rarely issue them permits to cross Qalandiya checkpoint and access the West Bank, cutting them off from villages such as Bir Nabala and Ram, where they have family relatives.

For nearly the past twenty years Israeli officials have attemped in several occasions to force them off their land. However, even after the Israeli forces demolished their houses, residents of Tal ‘Asada remain steadfast on the land.