New
Home / Hebron / “When the soldiers saw him coming with the flag they drew their guns and shot him”: Cold blooded murder of 19-year-old in Dura

“When the soldiers saw him coming with the flag they drew their guns and shot him”: Cold blooded murder of 19-year-old in Dura

On Tuesday, between two and four a.m., the Israeli occupation forces invaded the town of Dura, near Hebron in the West Bank and killed 19-year-old Moataz Idris Sharawneh. They shot him with three dum-dum bullets to the chest (a weapon declared illegal under international law)[1]. Then while he lay on the ground he was severely beaten by the soldiers and run over with their jeep, at which point he died. 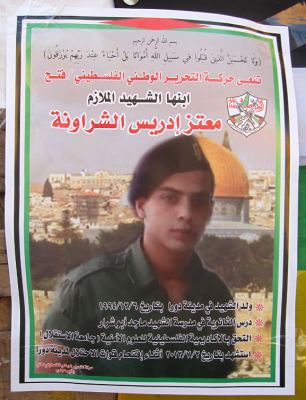 Poster made about Moataz’s martyrdom (Photo by ISM)

Soldiers prevented friends and family members from reaching Sharawneh to get him medical treatment. As Sharawneh’s nephew tried to reach him, soldiers shot him in the arm with a dum-dum bullet and then arrested him; since then, no one has heard from him. ISM spoke with the family in Dura yesterday, and his sister Nevin, who is studying to be a medical secretary, related a detailed account of his life and martyrdom.

This is what Nevin shared with us.

Throughout his life, Moataz acted out of love for his country and supported his people’s resistance.  He was on the front lines whenever there were clashes with the military, and he was also attending a military college in Jericho with the intent of becoming an officer.

His first goal was to pass his high school exams to get into the military college, to be able to defend his country. His family tried to keep him out of clashes, but they couldn’t because he was determined to resist the occupation and regarded martyrdom as a honourable act. Four years ago, even at 15, he presumed that he was going to be a martyr. On his Facebook account he had a page about the martyrs of Palestine, stating that they are above all of us.

Previously Nevin would laugh when the boys were in the street trying to catch the jeeps. Whenever Moataz came from clashes, his hands were black from tires. He would say that he was fixing car tires, in order to hide his participation from his mother and so that she wouldn’t prevent him from going out.

He was the main provider for his family, after the death of his father four years ago. In between semesters in college he was working in construction, to raise money for his studies and help his family. He was very close to his sister Nevin, who described them as “one soul in two places”. He was so good to his family that he never said no to them. However, he would never agree to anything that was wrong, and he was always trying to fix things, giving advice to his friends when needed. He always wanted to make things right.

Like many young people, he didn’t pray, but a week ago he started to pray a lot. In every call for prayer he was the first to go to the mosque. He was waiting for the next prayer. On Sunday night between 2-5 am he was praying in the mosque and he said he wanted to pray until his last breath. Two days before he started to have strange dreams, seeing his father. The day before his death, he was silent all day, but he was smiling to everyone as usual.

A month ago there was an incident, something had been set on fire, and all of his friends were implicated and arrested. He told his mother and his sister, “All my friends are in prison, so I guess I’m the next”. He had a friend, called Islam Asir, who was killed by the Israeli soldiers two years ago. Moataz had his friend’s jacket, the one Islam was wearing when he was killed. Last night he said to his family that he wanted to wear this, so that he would be with his friend if he was imprisoned or martyred.

In the evening before his martyrdom, he prepared to go to a friend’s wedding. He had a shower and he shaved and went to the party. He told Nevin to prepare his dinner for when he came back. When he returned, he sat with Nevin, his nephews and nieces in his sister’s room, and they were talking and having fun and stayed awake until 1:30 a.m. Then Nevin told him to go to sleep.

Nevin had just fallen asleep, when she was awakened by a loud noise. She opened the window and the door of her room. Moataz was standing in the corridor and asked what was going on. She told him she heard soldiers outside. She looked out of her window and saw two Israeli jeeps.

The last words he said to his family were “God; resistance”  (Allah, al moqawama). 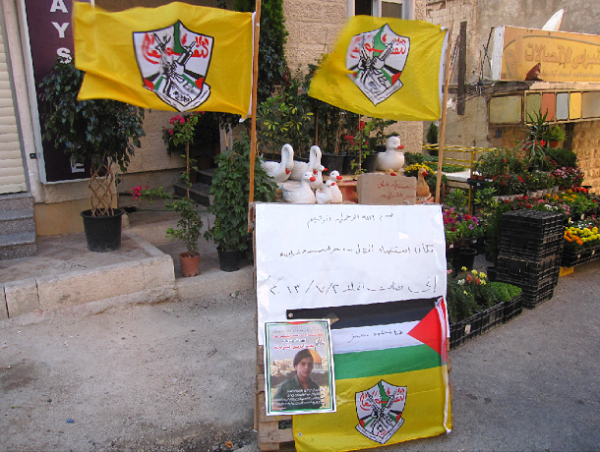 The first thing the family heard was that Moataz was injured by a bullet in his stomach. Just an hour after he went to the street, his brother called them to say that Moataz was in the hospital and he was dead.

His nephew, Bahaa Sharawneh, was with him when they went out on the street.  He was also wounded in his hand, but he was never able to go to the hospital. The Israeli soldiers took him with them and until now the family has not heard anything news about him.

One of Moataz’s friends, who was at the scene where this happened, told the family everything that he saw.  Moataz wasn’t throwing stones at the jeep, but he was standing on the side as the jeeps were passing through. When they saw him they turned back. He then took a large stick and smashed the cameras on the jeep, which are used by the Israeli military to take pictures of stone throwers, in order to arrest them later.

When the jeep returned, Moataz opened its door and he saw somebody he knew inside, and realised that this person was collaborating with the occupation forces. Moataz tried to take a picture of him to prove that he was a collaborator. The soldiers and the man pushed him outside of the jeep and they smashed his camera. He then saw some guys on the street holding a Palestinian flag and took it to put it on the jeep. When the soldiers saw him coming with the flag, they drew their guns and shot him. Three bullets. These were not just bullets; they were bullets that explode.

Soldiers prevented anybody from giving any first aid to Moataz as he lay on the street. His friends tried to reach him to help, but they were obstructed because the soldiers didn’t want him to tell anybody about the collaborator inside the jeep. At that point the soldiers started kicking him. Palestinian youth nearby started to throw stones at the soldiers, who began retreating. Moataz was still breathing at that time, but the soldiers, seeing he was still alive, drove over him.

In the morning news, soldiers claimed that the incident consisted of clashes between mafia and that the mafia was responsible for Moataz’s death. Later on a radio show, they told the interviewer that Moataz had been defending himself, so they shot him. The body of Moataz was taken to the Palestinian hospital ‘Alia for an autopsy to determine the cause of death factually. The autopsy confirmed the facts described above, which were that the body was beaten and shot with dum-dum bullets.

Moataz had enrolled in college, studying to be a sergeant in the Palestinian security forces. His colonel, who was responsible for the course, came to Dura to bury him beside his father. He took good care of him because he thought Moataz was a great guy and a great student. All of his professors and teachers were there.

Nevin relates that she is sad for herself, having to adjust to living without him, but she is also content that he found what he was looking for. She added that when they kicked him they were cold blooded, and they treated Moataz like an animal, without regard for human rights. He was shot at close range and was also prevented him from getting help.

Nevin knows that Moataz was not the first nor will he be the last martyr in Palestine. But she wants her voice to reach the international community and for them to hear her story because this was a cruel act of injustice. She said that she will do her best to keep up with the good cause.

[1]  Hague convention of 1899 (IV,3): Declaration concerning the Prohibition of the Use of Bullets which can Easily Expand or Change their Form inside the Human Body such as Bullets with a Hard Covering which does not Completely Cover the Core, or containing Indentations http://avalon.law.yale.edu/19th_century/dec99-03.asp