On Sunday, July 28, Israeli settlers severely burned land belonging to Hani Abu Haikel and his family in Hebron. Occupation soldiers, though at first trying to help stop the fire, ended up blocking the road so that Palestinian firefighters were delayed in reaching the scene. Several very old olive trees were destroyed in the fire which swept over immense swathes of land very quickly. In the video below, Hani Abu Haikel speaks about the incident and how Israeli settlers, soldiers and police work together to pressure Palestinian families to leave the Israeli-controlled H2 district of occupied Hebron. 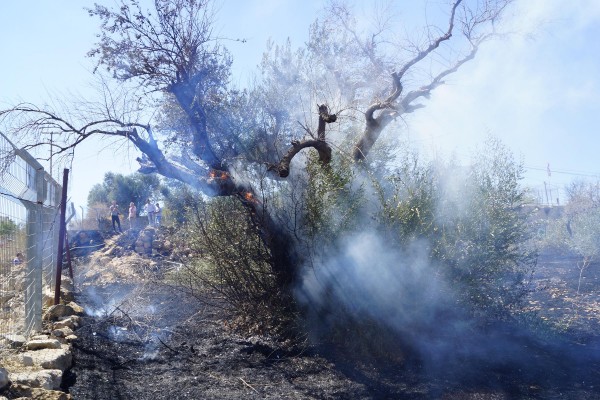 The previous evening, July 27th, Israeli police came to Hani Abu Haikel’s house and questioned him about a variety of subjects including whether he has any plans of leaving the area, to whicb he answered in the negative. Apparently this questioning is a regular occurrence. Israeli soldiers have also arrested Abu Haikel and his children on spurious charges, later releasing them without charge. The soldiers continue to regularly detain and interrogate members of the family.

Yesterday afternoon Abu Haikel saw settlers present in the area of the Israeli military base. As this is a common thing for them to do, he thought nothing of it at first. However, after this Abu Haikel saw the settlers spray water all over the small plot they have illegally cultivated on his land, right beneath the military base. He then saw them spray another, apparently flammable chemical over his land – soon after this, his land was on fire. Observers noted that Israeli soldiers were obstructing people from reaching the scene to help. Palestinian fire engines were prevented from reaching the scene for at least half an hour, allowing the fire to spread rapidly and scorch the land, despite volunteers passing buckets of water between them to try to quell the flames. 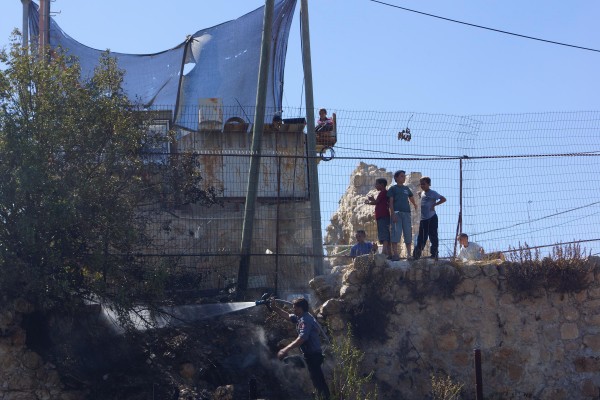 The only part of the Abu Haikel land that wasn’t completely scorched was the small plot cultivated by Israeli settlers. Hani Abu Haikel explained that this is the eighth time settlers have burned his property, including an incident ten years ago when they burned all of his trees, meaning that many of the trees that were burnt this time were very young. It has taken him these ten years to effectively replant his land again and now, again it will be years before his land is as it was before this crime.