On Friday the 5th of July on the outskirts of Anata, Jerusalem, there were violent clashes between Palestinian shebab (youth) and the Israeli army. At around 3pm Israeli army jeeps drove up towards the town of Anata and began taking photos of homes. Thirty minutes later local shebab arrived and began to throw stones at the army who then responded with tear gas and rubber bullets until past 8pm. 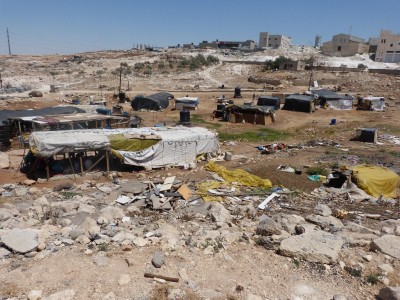 The Bedouin community of Anata (Photo by ISM)

The clashes took place around a road linking the town centre to a ring road which circles the annexation wall separating the West Bank from Jerusalem. On either side of this road are two Bedouin communities living in tents who are caught inbetween the weekly violent clashes that they themselves do not participate in.

Around twenty soldiers with military vechiles blocked the road near one of the Bedouin communities before walking up the road and alongside the tents. Internationals present communicated to the army to stay away from the tents and not fire gas into them. The army and shebab continued to clash throuout the afternoon and evening around the tents. The army repeatedly shot tear, rubber bullets and threw sound grenades at the shebab, at times firing from inside the grounds of a local mosque. A number of times the army walked through tents with weapons ready in total disregard for those living inside.

The weekly violent clashes often last four or five hours and have resulted in the army shooting multiple rounds of tear gas into the Bedouin tents. The Bedouin experience clear physical and psychological trauma from the clashes with a number of them suffering from asthma due to the regular exposure to tear gas. A local watermelon salesman whose stall is located between the two Bedouin communities – and therefore also in the middle of the clashes – recounted the screaming of the Bedouin children when the army arrived in previous weeks. 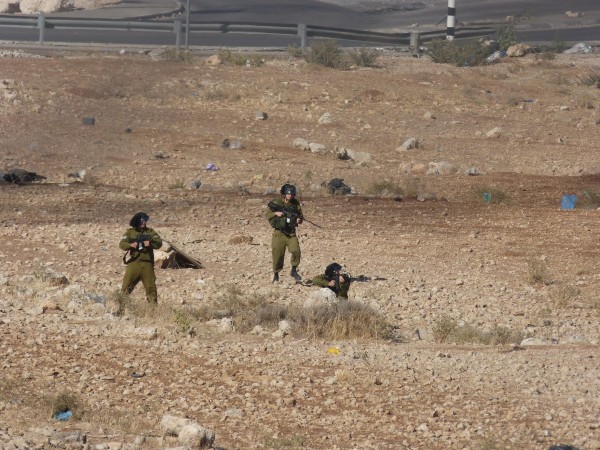 Some of the family members in one of the communities are deaf and mute leaving them unable to hear the tear gas and evade its path. No Bedouin were injured this week though residual tear gas blew into the tents. One shebab was shot in the leg by a plastic coated steel bullet but did not seek medical attention.

The families pay rent to live on the land but have no premission to build and thus have constructed tents from scrap wood and sheets with bare ground for floor. The tents offer little protection from the tear gas, sound bombs and rubber bullets.The communities have been home to a number of families and their livestock for the past two years. With scant support from people of the town of Anata the Bedouin are then left to endure the conquences of the weekly clashes in and around their homes.