New
Home / Reports / Two years of demonstrations in Kafr Qaddum: “Our struggle will continue until we fulfill our rights”

Two years of demonstrations in Kafr Qaddum: “Our struggle will continue until we fulfill our rights”

On the 4th of July 2013, the village of Kafr Qaddum defiantly celebrated two years of Friday demonstrations, which began in July 2011. The celebration, which included speeches and performances by village youth, was followed the next day by a further demonstration, the first of their third year, in which the Israeli military invaded the village before the demonstrators even gathered, attempting to make arrests.

The celebration on Thursday succeeded in showing the steadfastness and spirit of the people of Kafr Qaddum as they listened to speakers denouncing the occupation, danced to Palestinian music played by a live band and watched a theatrical dubke (Palestinian dance) performance showing the Palestinian shabab (youth) of the village vanquishing the invading Israeli army. 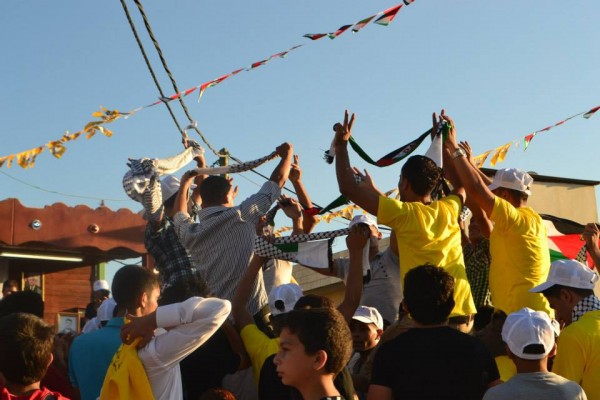 The demonstration which followed the next day was yet more evidence of this spirit of resistance, with hundreds of demonstrators from Kafr Qaddum and further afield marching towards the roadblock hindering their access to the nearest city of Nablus, chanting, dancing and clapping. The Israeli army had invaded the village before the demonstration even began, chasing and attempting to arrest people who were walking to and from Friday prayers. During the demonstration this campaign of attempted arrests continued, with the army surrounding the village from all sides and invading down side streets in attempts to grab peaceful demonstrators. Tear gas and sound grenades were fired regularly by the Israeli military, who tried unsuccessfully to quash the protest.

The village of Kafr Qaddum has been directly affected by the occupation, both through settlement land annexation and the closure of the main access road to Nablus. However, the protesters maintain that their focus is not just local, they are looking at the wider issues of occupation. Protester Murad Shtiawi said on Thursday; “The popular resistance is not related to achieving only a very simple aim or target. It is not only the road – we know the road will open one day. We feel that the real resistance is related to the occupation, so if the occupation is still on our lands, our struggle will continue until we fulfil our rights.” They also insist that the resistance cannot be limited to Friday demonstrations – “Our struggle will extend to other days in the week, because the occupation is still occupation on Thursday and Saturday. We will continue our struggle every day.”

Around 4,000 dunums of Kafr Qaddum land has been appropriated by the illegal settlement of Qedumim and the demonstrations started as it was threatened that this amount would increase as the settlement expanded. Kafr Qaddum’s main road was closed in 2002, making access to their neighbouring villages of Jit, Sarra and the city of Nablus impossible without a 14 kilometre detour on badly paved roads through olive groves. This roadblock sparked the use in Kafr Qaddum of the Arabic chant, translated in English as “out, out the occupation, the open road is the solution.” 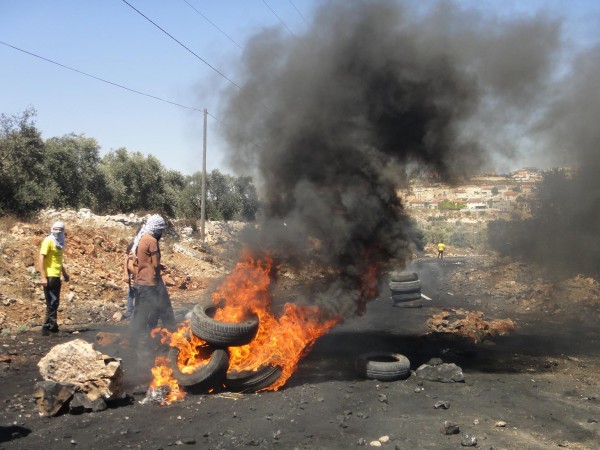 Demonstrators set fire to tyres on the main blocked road to Nablus, Qedumim illegal settlement visible in the background (Photo by ISM)

More than 120 Kafr Qaddum villagers have been arrested since the demonstrations began, spending from around four to ten months in prison. This in turn has led to payments of over 120,000 shekels to the Israeli courts for their release. Around 200 people have been shot with teargas canisters, six of whom were shot directly in the head. One of these injuries resulted in a fractured skull, bleeding on the brain and a loss of speech for the injured demonstrator.

The children of Kafr Qaddum have been targeted, most recently with threats of arrest by the Israeli military, who stuck up pictures of four children around the village, accompanied with the message “we will arrest you if we see you, or we will come to your homes.” Children as young as six months have suffered from the serious effects of teargas inhalation as teargas has been fired into homes in the village.

But despite this suffering, the village’s commitment to resisting the occupation continues, as Murad once again reinforced on Thursday, with a message to the world:

“The real resistance is related to the occupation, so if the occupation is still on our lands, our struggle will continue – until we fulfil our rights. This includes letting the people of Kafr Qaddum and all of Palestine live free in an independent state on the 1967 borders, without settlements; releasing all of the prisoners from prison; and letting all the refugees from all over the world come back to their homeland in Palestine. Our message to the world is that we will continue to struggle until we fulfil our rights.”