New
Home / Reports / Siam family from Sheikh Jarrah, struggling against eviction order and not giving up

Siam family from Sheikh Jarrah, struggling against eviction order and not giving up

Another family from Sheikh Jarrah received an eviction order by the Israeli Magistrate’s court. The family has appealed the court’s decision and is awaiting the next court hearing. 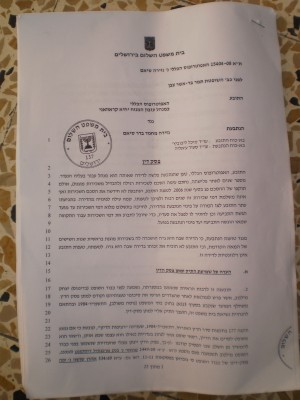 The latest family to be given an eviction order in the East Jerusalem neighborhood Sheikh Jarrah is the Siam family. After a six year legal battle, the court has ruled the house to be ;.labsentee property and the eviction has been ratified by the Magistrate’s court. The court has ruled that the family could not prove ownership of the house and therefore should leave the property by the end of July. Nathira Siam has appealed the case to the second court with help from the community. She does not know when the second court hearing will take place, which leaves the family in a situation of insecurity.

The Siam family has been renting the house from a woman called Sabriye Taha since the early 1960’s until she passed away. The family had a rental contract with Sabriye Taha and has been paying her regularly. When Sabryie died, the Israeli government changed the status of the house to absentee property. The Custodian of Absentee Property ordered the family to pay an extra amount of money each month if they wanted to keep the house. This amount of money was constantly raised. They presented this to Nathira Siam in a contract in Hebrew, which she was not able to understand. Nathira explains that they forced her to sign the paper by telling her that she would otherwise lose her house.

The Israeli government was able to do so according to the law of Absentee Property from 1950. This law applies to property and property rights, belonging to anyone who was not present at his home in Israeli controlled areas during the period between November 1947 and 19th May 1948. The Israeli authority was not obligated to inform the concerned party, meaning families could lose their homes without even being aware of it. Additionally the families would not get any compensation for the loss of their homes. When the law was passed, East Jerusalem was under Jordanian control and was therefore not included in this. However, after the illegal annexation of East Jerusalem into the state of Israel, the homes of the Palestinians fall under the law of Absentee Property. In the 1970’s, due to international condemnation of the practice of this law, the residents of East Jerusalem were temporarily exempt from it. Nevertheless, once the original owner dies the property again falls into the category of Absentee Property. This is the case of the Siam family after the death of Sabriye Taha. 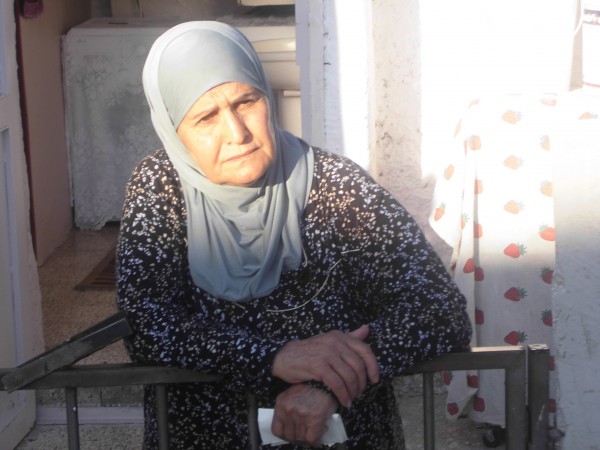 Nathira Siam in her house (Photo by ISM)

When asked where the family would go if evicted after the next court hearing, Nathira Siam says that she has nowhere to go, she has only God. However, she stays strong and insists that she did not even consider the possibility of having to leave her home through the last 50 years.

The case of the Siam family does not stand alone. Most of the families on the street have received eviction orders and are facing the same process as the Siam family. Since 2008, in the area of Sheik Jarrah,  three families have been evicted and their homes taken over by settlers. In addition, several buildings in the neighbourhood have been taken over by settlers, including the front building of  al Kurd’s family home.

This is part of the Israeli policy of ethnic cleansing in Jerusalem and greater Palestine. The ultimate aim of the Zionist organizations that are behind the evictions of Palestinian families is to convert Sheikh Jarrah into a new Jewish settlement and to create a Jewish continuum that will effectively cut off the Old City from the northern Palestinian neighborhoods.