Updated: “Shabbat shalom” – no peace for Palestinians in Hebron this Saturday

Update 28th July: Abu Shamsiya was last night transferred to Ofer prison, to another prison near Jerusalem and then once more to another police station. He was released at 16.30 today after the 1000NIS bail was paid. He has been given a court date to face the false charges of spitting on a soldier on the 30th November. The family have video evidence showing that the attacks were instigated by settlers and there was no violence from Abu Shamsiya.

Update 28th July: Israeli authorities are demanding 1000NIS on bail to release Abu Shamsiya. He is accused of spitting a soldier and will have a court hearing soon (exact day still unknown).

Stone and egg-throwing, beating and kicking, headscarves torn off and an arrest based on two soldiers lying. This sunny Saturday in Hebron (Al-Khalil) was all about settler youth attacking innocent Palestinians and internationals while soldiers looked the other way. 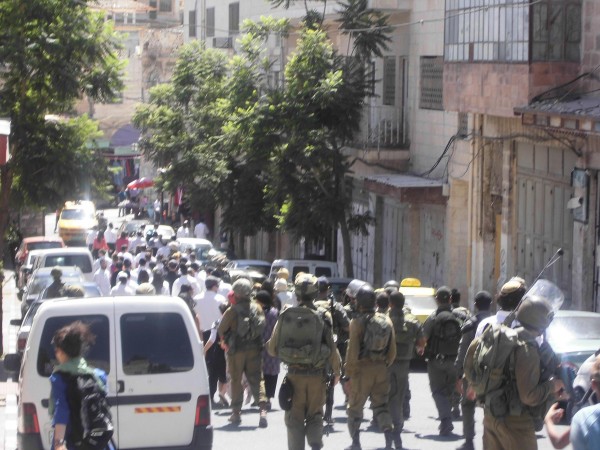 Later, at around 4pm, whilst walking down Shuhada Street international activists had stones thrown at them by two settler teenage boys. When they returned an hour later, they were attacked again by settler youths who jumped at them and violently pulled off their headscarves outside Beit Hadassah settlement. When the internationals complained to the soldier stationed at the nearby checkpoint, he showed no sympathy and said his job was only to protect the Jews living in Hebron.

About half an hour later, three international activists were passing by the Qurtoba School when a masked settler ran up the hill towards them, throwing eggs. One activist was hit in the face with two eggs whilst soldiers looked on from the watchtower above the school – they took no action against the settlers saying only “What do you want us to do?”

At around 6pm some settlers – who had previously been bathing in the Abraham spring close to the Islamic cemetery next to Shuhada Street whilst being guarded by a group of soldiers – tried to steal a home-made kite off two Palestinian kids. A Palestinian teenager  managed to prevent them from taking it.

At around 6.30pm, a group of about thirty settler youths entered the property of the Abu Shamsiya family in Tel Rumeida. They threw stones at the family who were outside on the veranda preparing food for the iftaar fast-breaking meal. They also beat the 11-year old son of the family, Muhammad. When his father, Abu Shamsiya, went to the soldier stationed at the checkpoint just outside his house to complain and ask for help, the soldier simply told the settlers to go ahead and continue attacking the family. 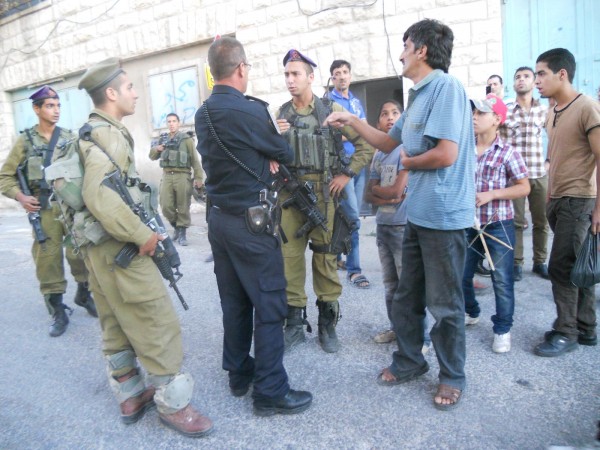 A settler youth then ran up to Abu Shamsiya and violently kneed him in the stomach right in front of the soldier. Another soldier grabbed Abu Shamsiya’s wife Fayseh, who was filming the incident, by her hair and pulled her to the ground. The police, who happened to be parked in their car just up the road, finally decided to intervene. Abu Shamsiya complained against the two soldiers who had attacked him and his family and were complicit in the settler violence.

In a rare turn of events, the police believed Abu Shamsiya’s story – although the soldiers denied it – and took these two soldiers to the police station for further questioning. However, they did not arrest any of the settlers, who escaped into the Tel Rumeida settlement and the police chose not to follow them. The group of settler youths returned soon after and although Abu Shamsiya and various other eyewitnesses clearly pointed out the attackers to the police, they took no action.

Abu Shamsiya himself was later taken to the police station in order to file an official complaint and so that the police could examine his video footage of the incident. The Abu Shamsiya family were initially hopeful that this might lead to some positive result, but two hours later they got a phone call that Abu Shamsiya was now being detained in the police station on the charge of spitting at soldiers. Clearly the two soldiers whom he complained against wanted revenge and made up this story to incriminate him. His family is deeply worried and hopes he will be released by tomorrow. 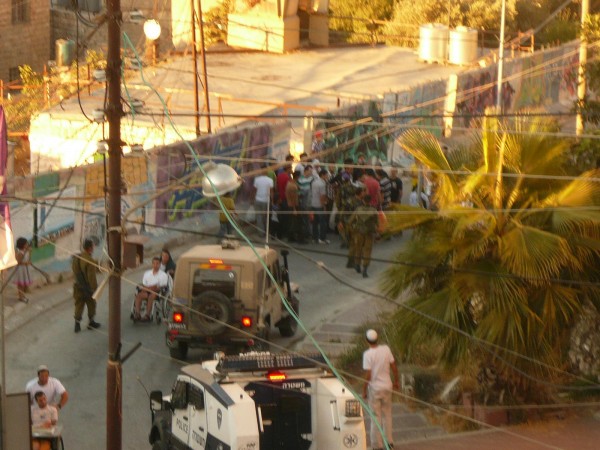 Settlers, soldiers and police gathered around the Abu Shamsiyah home following the attack (Photo by ISM)

During the same incident, which attracted a lot of onlookers outside Abu Shamsiya’s house, Palestinians, settlers and internationals alike, a settler woman who is notorious for being extremely aggressive and has attacked internationals and Palestinians on several occasions, started pushing and shouting at an international activist as well as pulling at her scarf to strangle her. This happened right in front of a group of soldiers who chose to just stand by and watch, and even mocked the international activist when she complained and asked whether they thought it was okay for her to get strangled in the middle of the street.

Although the settler attacks in Hebron are not always as numerous and severe as they were on this particular day, none of what happened today is new or unusual to the residents of Hebron. Hebron is the only West Bank city that has settlers living inside the city itself. It is home to a particularly extreme and aggressive settler community, numbering about 500, that constantly harrasses, intimidates and attacks Palestinians with near impunity and the protection of about 2,500 Israeli occupation soldiers stationed in Hebron.