On the 16th of July, Omar Jabril, 28, was pasturing his sheep in the surroundings of Mirkez, in the middle of firing zone 918, when three settlers assaulted him, injuring him severely. Some villagers witnessed broken teeth and a large amount of blood on the victim. Israeli soldiers finally intervened, stopping the settlers and bringing Omar back to his village. Neighbors underline the fact that the assault happened during Ramadan, a period of increased vulnerability for the Palestinians, who fast through the whole day. The Israeli occupation forces left to the comumnity the responsibility of bringing him to the Khalil hospital. The victim’s family doesn’t believe in the usefulness of filing a complaint to the Israeli authorities.

According to a neighboring family, if the army hadn’t come to rescue him the shepherd would be probably dead by now. It is important though to note that the soldiers came from the same outpost than the settlers. The International Solidarity Movement heard yesterday that Omar Jabril is now resting in Yatta.

Mirkez is located in the South Hebron Hills, in a zone declared a “closed military area” by the Israeli army. This part of Massafer Yatta is also an Israeli natural reserve. Around 1000 Palestinians are still living in there, facing continuous harrassment from settlers and military trainings on their land. 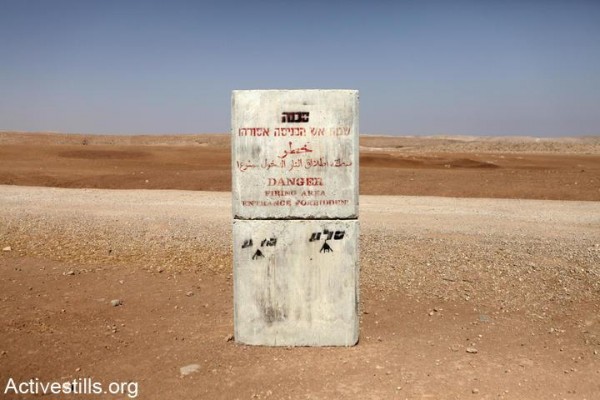 Blocks marking the start of “Firing Zone 918” (Photo by Activestills)

On 16th November 1999 the Israeli military forcibly removed over 700 cave dwellers, eighty-three families, from their caves in the South Hebron Hills, because the Israeli family said they needed the area for a military firing range (designated as a closed military zone for training, or “firing zone 918”). The soldiers confiscated and put the belongings of the Palestinians into military vans. They demolished scores of caves, cave entrances, and wells. Flocks of sheep were scattered. The people and their flocks had to spend the cold winter away from their caves. The people resisted by going to the Israeli High Court. On 29th March 2000 the villages won a partial, temporary victory, when the Israeli High Court ruled that residents who had signed on to the lawsuit in the Israeli High Court could return to their cave homes and land, pending a decision of the case. Finally the High Court decided that all residents could return. (In: Arthur G. Gish: At-Tuwani Journal: Hope & Nonviolent Action in a Palestinian Village, Herald Press, 2008)
For more information on firing zone 918 see also here. Sign a petition calling for abolishing the firing zone here.