On Friday 19 July, the residents of Kafr Qaddum gathered for a demonstration against the Prawer Plan, an Israeli government plan that will ethnically cleanse the occupied al-Naqab desert. Protesters were violently attacked by Israeli soldiers who repeatedly raided the village firing tear gas, rubber-coated steel bullets and sound grenades. 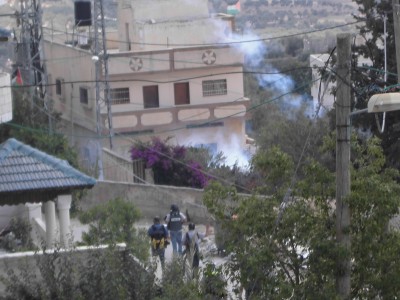 At approximately 11:00, residents attempted to construct a defensive barricade at the eastern edge of the village to prevent soldiers from entering; however, while they were building, nearly 50 Israeli soldiers ran down the main road closest to the illegal Israeli settlement of Qedumim, attempting to make arrests. The soldiers chased the people, including small children, back to the center of the village, where they fired tear gas and rubber-coated steel bullets directly at the people. Nearly 25 soldiers then took a position on the top of the hill overlooking the village, which prevented many people from traveling down the main road in order to attend the Friday Ramadan prayers.

In the hours that followed, the Israeli army attempted to surround the village; they hid themselves in the olive groves and in the private gardens of several residents, effectively trapping the people inside their own homes. Several times the army attacked the protesters, firing tear gas, rubber-coated steel bullets and sound grenades. Some residents reported that the soldiers also fired live ammunition, just as they did during last week’s demonstration, when they fired at four teenage boys.

No arrests were made, though three people suffered from tear gas inhalation. 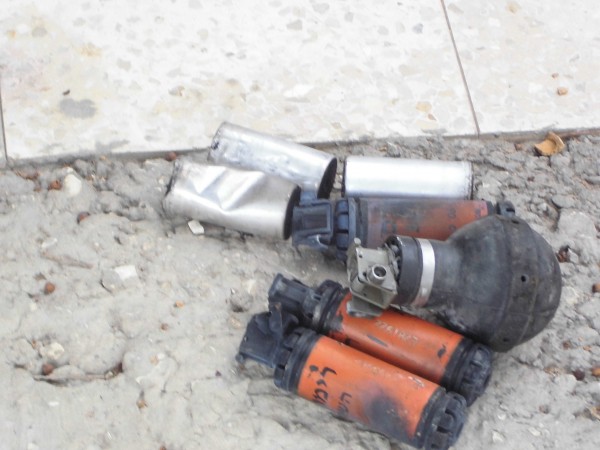 Kafr Qaddum is a 3,000-year-old agricultural village that sits on 24,000 dunams of land. The village was occupied by the Israeli army in 1967; in 1978, the illegal settler-colony of Qedumim was established nearby on the remains of a former Jordanian army camp, occupying 4,000 dunums of land stolen from Kafr Qaddum.

The villagers are currently unable to access an additional 11,000 dunums of land due to the closure by the Israeli army of the village’s main and only road leading to Nablus in 2003. The road was closed in three stages, ultimately restricting access for farmers to the 11,000 dunums of land that lie along either side to one or two times a year. Since the road closure, the people of Kafr Qaddum have been forced to rely on an animal trail to access this area; the road is narrow and, according to the locals, intended only for animals. In 2004 and 2006, three villagers died when they were unable to reach the hospital in time. The ambulances carrying them were prohibited from using the main road and were forced to take a 13 km detour. These deaths provoked even greater resentment in Kafr Qaddum and, on 1 July 2011, the villagers decided to unite in protest in order to re-open the road and protect the land in danger of settlement expansion along it.

Kafr Qaddum is home to 4,000 people; some 500 residents attend the weekly demonstrations. The villagers’ resilience, determination and organization have been met with extreme repression. More than 120 village residents have been arrested; most spend 3-8 months in prison; collectively they have paid over NIS 100,000 to the Israeli courts. Around 2,000 residents have suffocated from tear-gas inhalation, many in their own homes. Over 100 residents have been shot directly with tear-gas canisters. On 27 April 2012, one man was shot in the head by a tear-gas canister that fractured his skull in three places; the injury cost him his ability to speak. In another incident, on 16 March 2012 an Israeli soldier released his dog into the crowded demonstration, where it attacked a young man, biting him for nearly 15 minutes whilst the army watched. When other residents tried to assist him, some were pushed away while others were pepper-sprayed directly in the face.

The events of the past week are part of a continuous campaign by the Israeli military to harass and intimidate the people of Kafr Qaddum into passively accepting the human rights violations the Israeli occupation, military and the illegal settlers inflict upon them.