On Thursday 27th June, beginning at 9 AM, Israeli military bulldozers demolished the homes and structures of four families in the village of Khirbet ‘Atuf, a shepherding village east of Tammun in Tubas Governorate. One man was taken to the hospital in Nablus after being physically beaten while attempting to protect his family from Israeli soldiers. Another man had his vehicle confiscated by Israeli authorities, and the total cost of his lost property totals $13,000 USD, not a small sum for a shepherding family. While Israeli authorities usually provide demolition notices to the families whose homes they are destroying, these families were given none.  Other villagers fear that the demolitions of their own homes may come without notice at any moment. 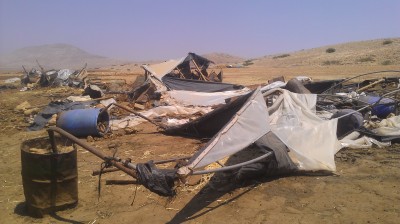 The village, which is located in Area C and therefore under complete Israeli military and civil control, is no stranger to home demolitions. All four families whose homes were demolished on Thursday have had their homes demolished at least two previous times, and international aid agencies have provided temporary tents for the families to sleep in. The people are facing health problems from excessive heat exposure, and in some cases their sheep also no longer have protection from the sun – their shelters having also been destroyed.

The landscape of the village offers one of the most chilling images of Israeli apartheid. The villagers who has been prevented from farming their land by the Israeli military is dry, brown, mostly barren of vegetation and repeatedly subject to home demolitions; while Beqa’ot, the illegal Israeli colony directly adjacent to the village, is green, well-off, and receives the perpetual support, funding, and protection of the Israeli state and military. 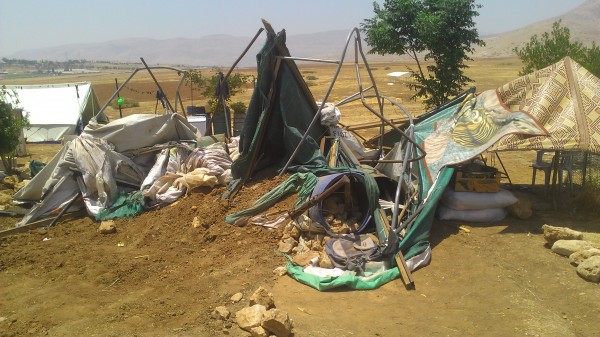 Weekly military training exercises occur in the village, and the residents are forced to leave their homes during the duration of these exercises by the military. Unexploded ordnance (UXO), which the Israeli military is infamous for leaving behind during its 2006 war with Lebanon and the US military during its imperialist war in Vietnam, Laos, and, Cambodia, has been left behind in the village as a result of these military exercises. When these bombs are disturbed incidentally, they explode, and have caused thirty villagers to lose their limbs. Since 1970, fourteen villagers have died as a result of these exercises.

When asked what they will do next, the families whose homes have been destroyed said that they are seeking outside financial assistance to rebuild their homes. 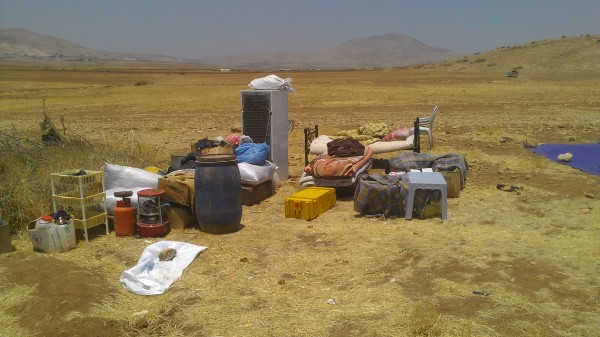