In the early hours of the 7th June, the Israeli military conducted a night raid on the village of Kafr Qaddum for what is reportedly the tenth time in the last three weeks. This follows threats made by soldiers against children of the village and continued harassment, day and night. Friday’s demonstration was a chance for the children of the village to show that they are not afraid and demand justice. Although the peaceful march was violently repressed with excessive use of tear gas, the villagers remain steadfast. 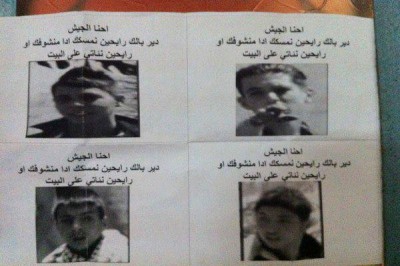 Child pictures with threats by army

Recent weeks have seen a rise in night raids on the village, many for several hours with gas, rubber bullets and live ammunition fired both at random throughout the village and at people who leave their homes to protect their families. During Thursday night’s two hour invasion from 12.30-2.30am, Israeli soldiers fired live ammunition into the air to threaten residents and shot multiple rounds of tear gas, some through the windows of people’s homes. One home was that of a seven month-old baby who was suffocated by the gas and had to be treated in an ambulance.

This child abuse follows the army’s recent pasting of posters around the village showing the faces of four 15-16 year old children. The message on the posters read, “We are the army, take care, we will catch you if we see you, or we will come to your house.” During night raids over the course of the last weeks Israeli soldiers have also stolen tyres from the village, which are used in the course of the Friday demonstrations to block the army from entering the village.

At today’s demonstration, the children of Kafr Qaddoum held placards calling for the soldiers to face justice for their threats against them and for their repression of the people of the village and of Palestine. Around one hundred people calling for justice marched through Kafr Qaddum towards the Israeli roadblock which prevents access for villagers to the main road to Nablus; the obstruction means an extra 14 kilometres on the journey and is emblematic of the restriction of movement imposed by the Israeli authorities on Palestinians in the West Bank. 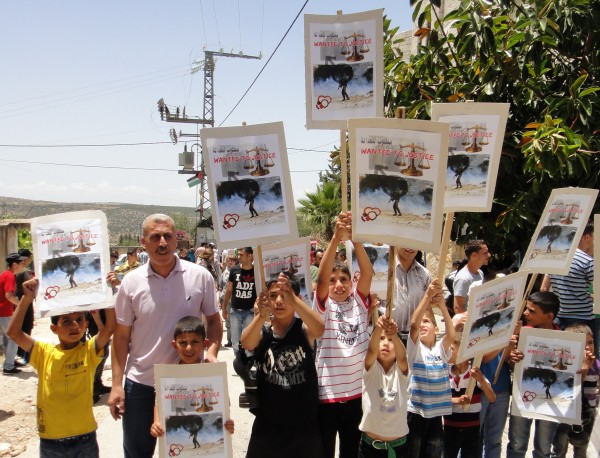 As protesters walked along the road they were immediately showered with tear gas, which was shot in multiple rounds from ‘the tempest’ – a jeep-loaded device used to shoot up to sixty canisters at a time. Soldiers also shot metal gas canisters directly at the peaceful demonstrators, violating Israeli rules of engagement which state that tear-gas should be shot at an arc into the air. Several people were injured and many suffered from tear gas inhalation and needed to be treated by Palestinian ambulance teams. Tear gas fired by Israeli forces sparked fires in olive groves around the village, requiring the fire brigade to also be called.

Israeli forces continue to threaten and repress non-violent resistance to the occupation with tactics such as threatening children and attacking the village at night, but Mourad a villager today stated, “Despite the fact that our village is under siege and our people suppressed, we are still determined to continue our march and achieve our goals.” 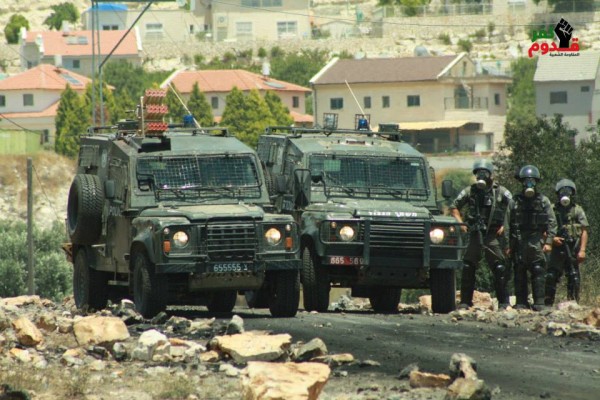