Two fishermen arrested by Israeli navy and their boat confiscated

During the night of Friday, June 7, 2013 there was an escalation of attacks by the Israeli navy against the fishermen of Gaza. The Committee of the fishermen of the Union of Agricultural Workers Committees had reported attacks along the coast of Gaza and the arrest of two fishermen, in addition to the destruction of fishing nets. 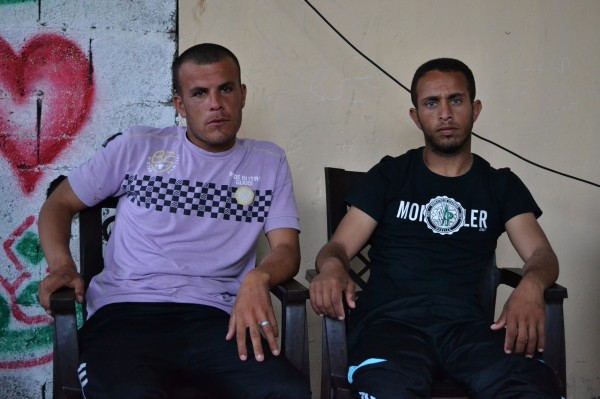 The two fishermen arrested, Khader Marwan Al-Saidi, 24, and Hassan Ali Murad, 27, were arrested around 3:00 am on Friday and were released the next day, but their boat was confiscated.

The two fishermen live in the Shati refugee camp.

Thursday afternoon, they had gone out into the sea around 15:00 and they were headed south, stopping to fish south of the coast of Shalihat.

Hassan Ali Murad told us that an Israeli military navy ship began to attack by shooting at the boat at 2:00 in the morning.

“With us there were another 6-7 Hasakas, we were fishing in a group. When the soldiers started shooting all the fishermen escaped, but the engine of our boat was dead and we were not able to escape. We tried to turn on the generator but we did not succeed. ” The fishermen were about 6 miles from the coast. We shouted to the soldiers, “Go away, we’re less than 6 miles!”, But the soldiers continued to shoot”, added Hassan.

The arrest and interrogation

A zodiac boat with a crew of 6 Israeli soldiers approached them. The soldiers ordered the two fishermen to undress, dive into the water and swim to the Israeli navy boat. “The soldiers shot at us while we were swimming”, said Hassan. On board the boat the two fishermen were blindfolded and handcuffed. The soldiers then confiscated the boat of fishermen and all the equipment. Hassan explained that the generator cost about $6,000, the boat cost about $3,000, the equipment about $ 1,000. For a total of $10,000, that fishermen will still continue to pay because they are already indebted to deal with these expenses.

“We were held for about 30 minutes on the Israeli gunship, in the cold, while the soldiers carried on driving the navy boat away. We were lying on the ground and they hit us with their feet behind our heads, then we were hooded. I could not breathe, after half an hour I was dying for the lack of air “, said Hassan. The fishermen were transported to the port of Ashdod in Israel, given a shirt and a pair of trousers and remained handcuffed and blindfolded until 12.00 the next day. Hassan also told us that the soldiers laughed at them and beat them. A doctor then visited them, and informed Hassan he was suffering from various health problems. Hassan replied to him: “What do you want from us? You have taken our boat, you have taken our lives, and now you want to check my health?” The doctor replied that it was his responsibility to check his health. Hassan told him: “I’m not angry about my health, I am angry because I cannot feed my children.” The two fishermen were detained in a room for four hours before being interrogated. An officer asked Hassan if he knew members of Hamas, if they were involved in armed groups and other questions of this kind. Hassan replied to him: “You’re destroying my life and you’re giving me these questions?”. The officer said: “Our concern is to destroy the lives of fishermen,” meaning that this was their mission.

Two years ago, Hassan had already been arrested by the Israeli navy along with his cousin, who had been wounded by a bullet in the leg. “Who will feed our children now? We do not have any other means. Who will pay our debts?” Hassan added.

While listening to the testimony of Hassan, another member of the family intervened, saying: “Every fisherman would rather die and be shot in the head rather than lose their own boat. The boat is our source of life.”

Hassan added that during the interrogation in Ashdod, the officer said, “You can ask a lawyer to get back the boat but its doubtful we’ll return the generator.”

Hassan replied to him: “The lawyer needs a big fee, and I have no means to pay it.” The officer replied: “It’s not my business, it’s the lawyer’s business.”

Back in Gaza, Hassan asked for help from a lawyer but he was told that the procedure would cost a sum of money equivalent to the purchase of a new boat.

Khader Marwan Al-Saidi then intervened, saying that the officer told him, “I must watch over you at sea night and day, and this bothers me. For this reason we destroy the boats.” Khader added that Israeli officials know all about their lives. Khader has recently become a father. The officer told him during questioning: “How’s your boy?”

In addition to the drama represented by the loss of the boat and all their means of subsistence, fishermen also continuously undergo psychological violence. Hassan showed us the pants that the Israeli army had given them. The soldiers said they have the same value of the boat and generator.

Towards Erez, the Release

After the interrogation, which lasted about 30 minutes, the two fishermen were detained two hours before being taken to Erez. The soldiers also shackled the legs of the fishermen and forced them to bend over to pick up a box which contained their work clothes. Then they were forced to walk for 500 meters with hands and feet tied up to a military jeep that brought them to Erez. In Erez two fishermen have were forced to walk another 500 meters.

The Erez crossing was closed. A soldier wanted to bring the fishermen back to Ashdod, while another soldier insisted on allowing them to cross the border. Hassan said that fortunately an elderly Palestinian woman who was returning from an Israeli hospital had reached the border. The woman asked the soldiers to open the pass to go home. After about 10 minutes the soldiers opened the pass. The two fishermen then walked for about 2 miles to get to the Palestinian office, where they were interrogated by the internal security. After interrogation, the two, exhausted and no car, were sitting in the street. The old woman who had passed through the crossing offered them a ride in the car. “You cannot imagine what happened. Even if you saw it on television you would not believe it,” said Khader.

Hassan is married and has four children. In his small home, the bathroom and the kitchen in one room, live 6 people. Hassan has been fishing since he was 10 years old. His father was ill and could not work, so after school Hassan assisted the family fishing.
Khader Marwan Al-Saidi is married and has a child. 14 people live in their house, while the whole family has 70 people in all.

Approximately 24 people depended on the boat that has been confiscated, of which the father is the owner.

As we listened to the testimony of the two fishermen, we learned that the Israeli Navy was attacking fishing boats off the coast of Soudania in the North of the Gaza Strip. Zakaria Baker, head of the Committee of the fishermen of the Union of Agricultural Work Committees told us that Israeli forces were opening fire on Palestinian fishermen and one of the boats had been surrounded about 2 miles from the coast. Zakaria, who was on the phone directly with those under attack, could not hear them well enough because of the gunfire.

We continued to listen to the terrible testimony of the two fishermen while the tension continued to rise in the atmosphere because of what was happening at the same time.

The fishermen think that the NGOs could help in covering the costs of the boat confiscated.

Israel has progressively imposed restrictions on Palestinian fishermen’s access to the sea. The 20 nautical miles established under the agreements of Jericho in 1994 between Israel and the Palestine Liberation Organization (PLO), have been reduced to 12 miles below the Bertini Agreement in 2002. In 2006, the area consented to the fishing has been reduced to 6 nautical miles from the coast. Following the Israeli military offensive “Cast Lead” (2008-2009) Israel has imposed a limit of 3 nautical miles from the coast, preventing the Palestinians from access to 85% of the water to which they are entitled according to the Jericho agreements of 1994.