In the early hours of the morning on the 27th June hundreds of Israeli army and police of the occupation forces invaded Nablus where they arrested people, destroyed homes and shot teargas and sound bombs all through the night.

The army remained in Nablus terrorising the population from 1.30am till 6.00am, when they eventually withdrew, forcibly taking three people whose families were left to repair their homes after they had been sacked by the army.

Father of three, Alam Hafif Qarim (40 years old) lives in a block of flats with his family in the North Mountain area of Nablus. Around 150 occupation soldiers and police in more than 20 military vehicles surrounded the building at 1.30am. The people in the building attempted to phone each other and outside for help and to find out what was happening, but the landlines had been cut and the mobile phone signal blocked. The army fired teargas canisters and sound bombs around the building, in the middle of the night. Fearing for the health of their children, residents closed their windows. 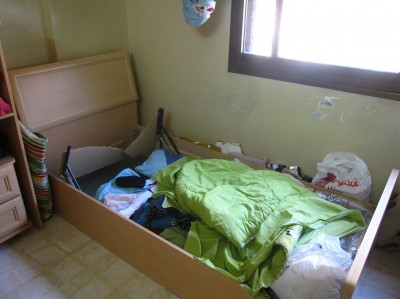 At 2.30am around 25 soldiers with attack dogs entered the building, and attempted to force the door; when that did not work, they hammered noisily on the door shouting in Arabic that they were the army. Alam quickly unlocked the door and the 25 soldiers moved into the house. They had a bag of tools – hammers and the like – with them. Alam’s wife was told to wake the children, two girls (7 years old and 3 months old) and their 10-year-old son, where they were forced with Alam, who was handcuffed, to sit in one room as the army began to use the tools to make holes in the walls, smash windows and overturn and tear up furniture in the recently redecorated house. “They came ready,” Alam’s family member later told ISM. The family repeatedly asked the soldiers what they were looking for and what they wanted, to which the army did not reply. “They came to destroy our house and our lives, under the pretext of looking for something.”

All belongings including food and clothes were thrown into the bathroom as the destruction continued. One soldier who was careless in the destruction of the bathroom, injured himself with the tool he brought, and so the army called an ambulance to help him while Alam’s wife had to later clean up his blood in her bathroom he smashed.

A female soldier then initiated a body search of Alam’s wife and 7-year-old daughter. Alam’s 3-month-old other daughter was also not immune from suspicion when a soldier began to attack her pushchair. Alam’s wife intervened and patted it down to show that it could have nothing hidden in it and shouted at him that he “had no heart.” Later it was found that the children’s mattresses had been ripped apart in their room decorated with Mickey Mouse.

The army eventually left after 4am, taking Alam with them. Alam works in a shop that sells parts of BMWs and had been granted a visa to visit Germany to pick up parts. He was due to pick up his visa in 2-3 days.

Not far from Alam’s shop, which showed his pride in his work and in providing for his family, to live a normal life in spite of the difficulties unleashed by the occupation, is the home of 34-year-old Mazin and his parents. At 2am more than 50 soldiers burst into Mazin’s home and started to methodically destroy his family’s belongings as they interrogated him for four hours. Mazin and his parents suffer from ill health, his mother suffering from cancer and Mazin from a heart condition since he was 20, when the army shot him with 10 bullets for which he spent 6 months in hospital before being placed in prison, the same number of years as bullets, before he even had the chance to fully recover. 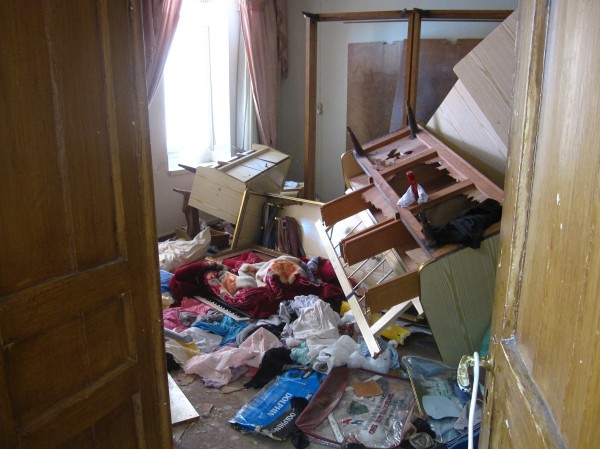 Mazin asked the soldiers for water for himself and his mother during the interrogation. The army refused. The soldiers demanded that Mazin hand over automatic weapons, of which he said he had none.

The army then sadistically smashed the home; destroyed all furnishing; threw food from the fridge over the floor; overturned the washing machine, the oven, and even hauled out water pipes. “They’re animals,” Mazin’s father said. Soldiers threw eggs at walls and broke them on chairs. They smashed the toilet bowl and attacked the walls of every room with their tools. See video here.

At one point a soldier approached Mazin; he put his hand on Mazin’s shoulder and told him: “I don’t want to arrest you. I want to kill you. I promise you, I will kill you.” Mazin’s parents were standing beside him when their son was being threatened with murder. The family noticed three stars on the soldier’s uniform, which meant he’s a battalion commander, a high rank in the occupation army. 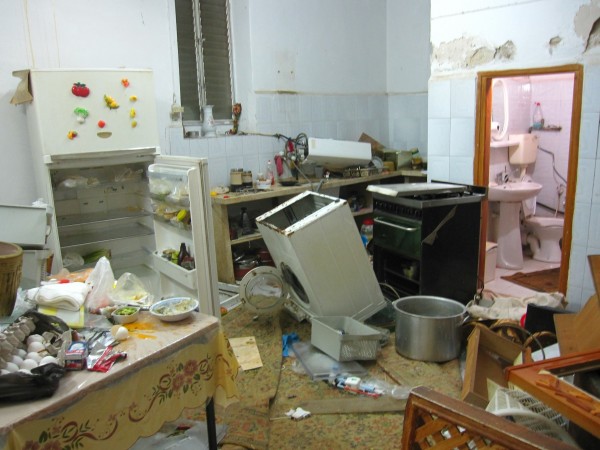 The army left the home in ruin; they took his laptop but found no illegal weapons. Later, Mazin, a FIFA-certified football coach in Nablus, found that his football had been skewered with a knife. In spite of condemnation from human rights supporters, Israel was recently chosen to host the 2013 UEFA under-21 championship.

Mazin and his parents chose to leave the house the way it was after the destruction; they hope that ‘“The world will see what life is like for Palestinians under Israeli occupation.”

Alam’s distraught family could not do this, when the army left they immediately started to clean and repair. “We didn’t sleep,” Alam’s sister said. She joined the family to help, as did many neighbours who came to support the family, as Alam is a popular man, but also through sense of duty and community.

The day after this attack on Nablus (Israel’s fourth in this last week alone), residents wondered what else the occupation army would do to their city the following night.Nablus is in Area A (according to the Oslo Accords), which means, in theory, that Israel does not have any military or civilian control over it.