On Friday 21st June 2013, around sixty protesters from the village of Nabi Salih and abroad gathered for the weekly protest. First, passing through the Olive grove, they descended the mountain towards the stolen village spring, but were met with a violent reaction from the Israeli military, who shot large amounts of tear gas and some rubber coated steel bullets directly at unarmed demonstrators. The soldiers then invaded the village on foot and in jeeps, shooting into civilian residential areas and injuring one medic. Fires ignited by Israeli tear gas canisters spread throughout the village. 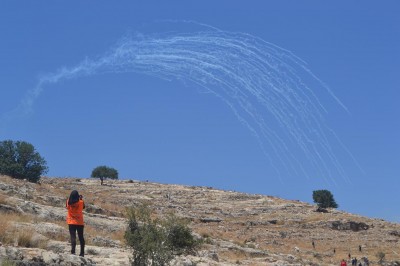 The ‘tempest’ of tear gas (Photo by ISM)

The demonstration started at around 13.30pm, with people gathering after the afternoon prayer. The group of protestors marched to the top of the mountain and started heading down towards their spring, where the settlers who stole it were visible. Two Israeli army jeeps, around twenty soldiers on foot and a private settler security vehicle were present, blocking access to the Palestinian spring. After about five minutes of the villagers walking peacefully towards the spring, the soldiers at the bottom of the hill began firing multiple tear gas canisters towards them. Soldiers who had invaded the village then began firing multiple rounds of the jeep loaded ‘tempest’ onto the protesters from above – using this method around sixty tear gas canisters were fired in the space of two minutes. Fires spread rapidly across the agricultural land of Nabi Salih, started by the heat of the tar gas canisters.

A soldier with a live ammunition rifle appeared to be directly targeting one Palestinian man who started walking closer to the spring, but he escaped safely before the soldiers had shot at him. This was darkly reminiscent of the death of Rushdi Tamimi, who was killed by an Israeli soldier on the same hill with live ammunition in 2012. 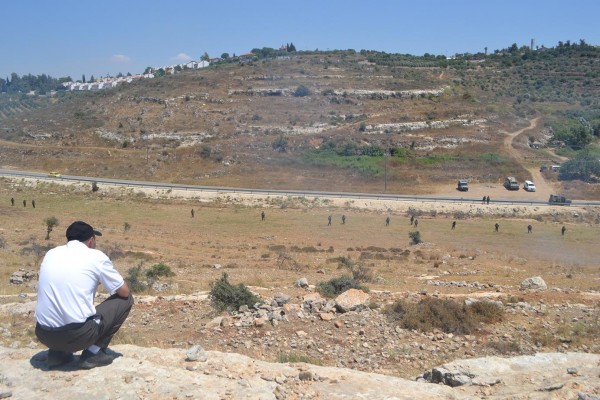 On the edge of the village, several jeeps and soldiers on foot invaded. They began firing rubber coated steel bullets directly at children and journalists as they moved between houses. One journalist was hit with a steel bullet on his midriff. The soldiers then advanced to the centre of the village, firing directly at protesters in the olive groves; these two instances were breaking the Israeli military’s own rules of engagement, which state that tear gas canisters must be fired at an arc into the air and not straight ahead and that steel bullets should be shot below the waist. One medic was present and was targeted directly by an Israeli soldier who threw a heavy metal sound grenade at his head. A tear gas canister was then shot at his foot, causing injury and burning his trousers. Nabi Salih medics have recently spoken out against the Israeli military targeting them during demonstrations – see report here. Several tear gas canisters were also fired at short range into the petrol station of Nabi Salih, risking igniting the fuel sources there.

The village of Nabi Salih has been demonstrating against the theft of the natural spring and the occupation since December 2009. Israeli forces violently suppress the weekly Friday protests by shooting tear gas canisters, skunk water, sound bombs, rubber coated steel bullets and even live ammunition at protesters. Two people have been killed, Mustafa and Rushdi Tamimi, and many others severely injured. Resident Bassem Tamimi, has spent 17 months in Israeli jails, merely for being a prominent activist at the protests. After more than three years and despite the repression, Nabi Salih continues to fight against the injustices of a brutal military Israeli occupation. 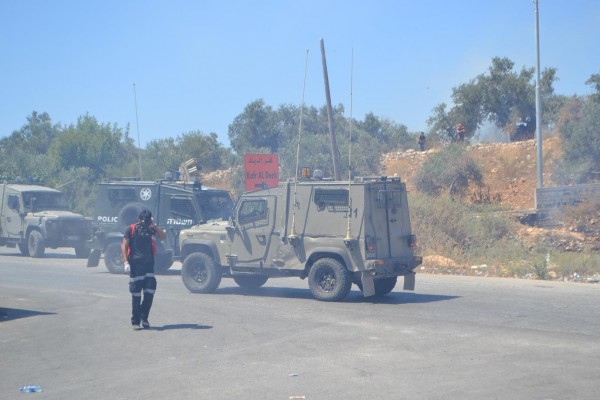