On Saturday, June 15, Israeli settlers and occupation soldiers spread through the old city of Hebron as part of a very provocative weekly tour that disrupts the daily lives of Palestinians living in the area. This week, soldiers also invaded the homes of several Palestinian families and climbed onto the roofs without the families’ consent. 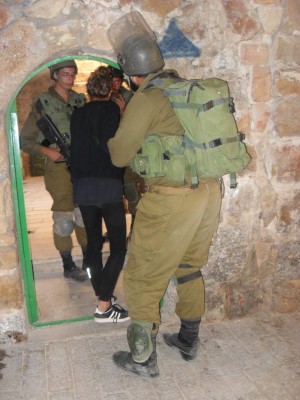 As it turns out, the settlers were not just innocent tourists, but bullies as well.  As they were walking along Shuhadah Street, they threw a huge quantity of water at the window of a nearby Palestinian home, and it spilled through the window, down the outer wall and all over the steps.  The soldiers then accused the Palestinians nearby of throwing the water and questioned the homeowner next door, as if they would throw water into their own houses, and as if soldiers of the illegal occupation had jurisdiction in such a case.  The family whose house the water was thrown at has suffered many incidents of settler harassment and military intrusions of late.

Conversely, as the soldiers left one of the houses they’d invaded, the Palestinian owner said “Shabbat shalom” (Hebrew for “Good Sabbath”) to them, demonstrating the Palestinian spirit of resilience, steadfastness and hospitality even in the face of military oppression and occupation.
This weekly “tour” of Hebron disturbs the daily lives of Palestinians in the busy Souq of Hebron, which has seen an extreme decrease in trade since the Israeli occupation forces closed Shuhada street, which was formerly Hebron’s busiest market. Rather than closing the Souq, where there are several illegal Israeli settlements, Palestinian residents think the Israeli forces are trying to make life there as uncomfortable as possible and thus pressure them to move out of the area. 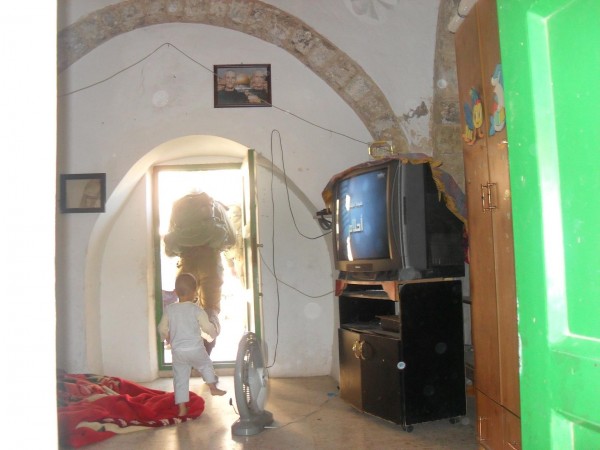