Thousands of Palestinians from across the Gaza Strip rallied by the closed Erez checkpoint on Friday, marking al-Naksa (the setback), Israel’s 1967 seizure of the Palestinian West Bank and Gaza Strip, Syria’s Golan Heights, and Sinai Peninsula, ceded to Egypt in 1982. 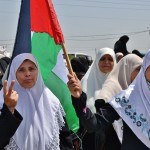 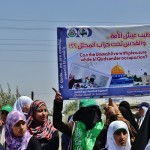 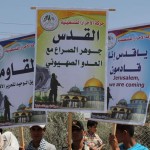 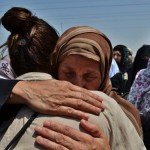 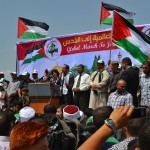 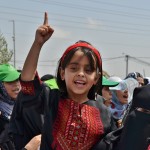 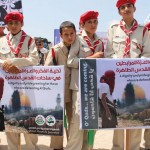 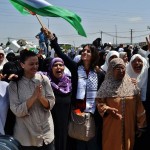 Israel’s capture of the territories included the ethnic cleansing of over 400,000 Palestinians from the Gaza Strip and West Bank, following al-Nakba (the catastrophe), Zionist militias the and Israeli army’s 1948 expulsion of over 750,000 from lands now claimed by Israel.

The effort was part of the second annual Global March to Jerusalem, an international mobilization protesting Israel’s attacks on Palestinians in Jerusalem and promising the return of refugees ethnically cleansed by its military forces.

According to a statement released today by the Global March to Jerusalem, “marches and sit-ins were held on Friday in more than 40 countries around the world, in addition to Palestine. They included a march to the northern border of the Gaza Strip and demonstrations in Jerusalem at the entrance to the Old City where Occupation Forces suppressed and arrested participants.

“Mass demonstrations took place in Gaza, Jordan, Egypt, Tunis, Mauritania, and Morocco, as well as in Yemen, Malaysia, Pakistan and Turkey. Likewise, there were large demonstrations in capitals and cities across Europe and North America, including gatherings in front of Israeli embassies.”