Friday afternoon, June 14, 2013, Muhareb Abu Omar, a Palestinian farmer aged 48, was wounded by Israeli army fire in the Deir El Balah, in the center of the Gaza Strip.

Omar was irrigating his land in the village of Wadi As-Salqa, 600 meters from the barrier that separates Israel from the Gaza Strip. 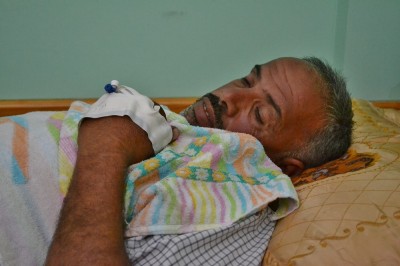 Omar reported that Israeli jeeps moved along the border while he was working. Suddenly, after about 10 minutes into the job, at approximately 19:30, a bullet struck him in the right leg. The soldiers probably shot from a jeep hummer.

Omar was alone on his land while other farmers were working in adjacent lands.

“I didn’t hear any firing, the soldiers used silent bullets. Suddenly I found myself wounded. I ran for 50 yards, then I crashed and I cried to my cousins that I was wounded”, said Omar. His cousins transported him to Al Aqsa Martyrs hospital.

Omar’s family is composed of 14 members: Omar, his wife, 8 sons and 4 daughters. Five of his sons work with him on the family land. The whole family depends on the production on this land.

Two of his sons, Nedal and Tareq, reported that Omar was reported to have an intermediate wound in the right tibia.

Dr. Saleman Al Attar, Department of Orthopaedics of Aqsa Martyrs hospital, reported that the general conditions of Omar are good. “The wound shot from a firearm always creates complications. The bullet hit the right thigh and there is the presence of fragments”, said Dr. Al Attar. In the emergency room, the doctors performed a cleansing of the wound, firstly a debridement followed by bandaging. After 3 days or 72 hours, Omar will be subjected to a further removal of devitalized tissue.

The wound is closed. The patient will then be given antibiotics and analgesics for about 4 weeks. 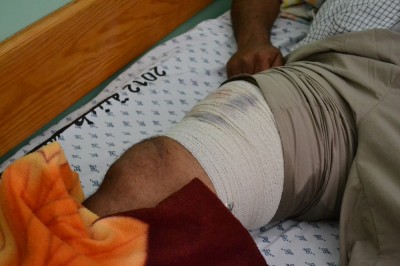 Dr. Al Attar stressed the psychological effect on patients who are aware of the a bullet still inside the body. “The patient will always have the impression of experiencing pain in the area where the bullet is, even if the pain is not real. There are social workers who can provide psychological support for this. Every Palestinian suffering since birth suffers some psychological problems”, concluded Dr. Al Attar.

During the last military offensive of November 2012, the al-Aqsa hospital has received many victims. “The hospital was full, we were trying to save those who were in better condition while others were dying patients in serious condition,” said Dr. Al Attar.

The arrangements for the cease-fire of 21 November 2012 established that the Israeli military forces should “refrain from hitting residents in areas along the border” and “cease hostilities in the Gaza Strip by land, by sea and by air, including raids and targeted killings.”

However, Israeli military attacks by land and sea have followed from the day after the ceasefire, and Israeli warplanes are flying over the sky constantly in the Gaza Strip. Four civilians were killed by the end of the military offensive “Pillar of Defense” and more than 90 civilians have been wounded.

These attacks against the civilian population of Gaza continue to occur amidst international silence.