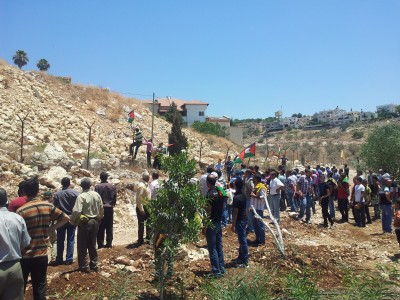 UPDATE 21th June: This morning, the 21st of June villagers from Azzun Atma gathered at the school where construction for the new wall started three days earlier. The villagers performed midday prayers together before marching around the school on to the land that bulldozers had worked on. They then hung Palestinian flags on the mesh barbed fence standing between the school land and the settlement of Sha’are Tiqva to signal their definance to the latest of a continuing policy of land theft, encroachment, isolation and deprivation of their lives by the Israeli occupation forces.

On the 18th of June, two bulldozers arrived with Israeli forces in the village of Azzun Atma, southeast of Qalqilya, and began to work on the land  behind the village’s school, to what is believed to be the construction of the new wall.

Accompanying the bulldozers to the village was the Israeli army and border police, including the local Israeli army commander who said the action was based on a High Court decision by the Israeli government. He said it was in order to protect their citizens, and if anybody tried to stop the construction, they would then close the gate to the village, the only way in and out. 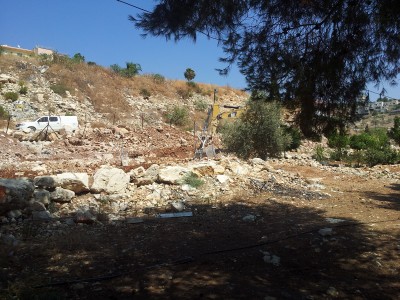 Two weeks prior to this, the Israeli army put up signs stating that this is where the construction of the new wall would begin. The villagers fear that this new construction is being done in order to replace the current two metre barbed mesh fence that surrounds the village from all sides and separates it from the settlements nearby, with the concrete wall. The wall’s existence and constant deviation from the Green Line is justified by the Israeli authorities by citing security concerns for its citizens, in this case the illegal settler colonisers in the area.

Azzun Atma is located two kilometres east of the Green Line and encompassed on three sides by the current wall, constructed in 2002, which leaves the village within a settlement block and separates it from the rest of the West Bank. The only way in and out of the village is through a military checkpoint with a small gate.  The village is thus stranded in the “seam zone” between the Green Line and the wall, surrounded by settlements, placing it under full Israeli military control. There is another checkpoint into the other side of the Green Line that people with work permits may cross, though there is a constant threat of the gate being closed and work permits being denied. Access to and from the village, therefore, is dictated by the Israeli military.

Palestinians living in the “seam zone” require permanent resident permits from the Israeli authorities to live in their own homes and work on their land. There are often few health and education services available in the “seam zone”, and those living inside it have to rely on checkpoints being open to reach workplaces and essential services.

The school where the construction is taking place has provided education for 300 children in Azzun Atma and a neighbouring village since 1966. Every day, the current wall and checkpoint restricts the freedom of movement of teachers and students. The school has so far lost one dunum of land to the wall and the septic system faces demolition orders. 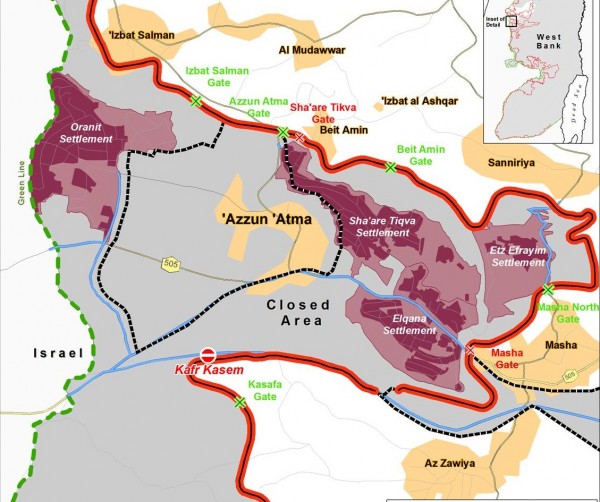 In 1982, the Israeli authorities established two illegal settlements: Oranit to the northwest and Sha’are Tiqva to the northeast of Azzun Atma. The settlements have expanded over the years, and more than 2500 dunums of the village’s land have been stolen by them. Sha’are Tiqva now comes within metres of Azzun Atma, and since 2005, villagers have been subject to verbal harassment from settlers. The wall, though purported to be a security measure, is essentially another way for the Israeli government to steal land from their Palestinian owners and isolate villages and cities from each other, turning them into easily controllable cantons.

Isolating people and making daily life as hard as possible under occupation is a tactic used by the Israeli authorities to force villagers to leave their land and homes. However, residents of Azzun Atma remain steadfast in their land and will continue to resist the land theft, isolation and deprivation of their lives by organising protests.