Thursday, 30th May 2013, roads to the villages of Hares and Kifl Hares (Salfit District) were blocked for three hours by the Israeli military. Za’tara checkpoint was closed in both directions from Ramallah and Nablus; there were also numerous flying checkpoints on the road to Salfit.

At 03:00am on Monday 27th May four boys were arrested from Kifl Hares village, all from one family, including two brothers, their cousin and neighbor. At the same time the Israeli military came to Hares and served two boys a note instructing them to come to Qalqiliya for court that same morning. The boys obeyed, attending their court hearing where their work permits were made invalid. Without these papers they are unable to legally access their place of work.

This nightly terrorizing of the people of Hares and Kifl Hares by the Israeli military is constantly exacerbated by the expanding presence of the neighboring illegal settler colonies of Ariel, Revava, Yaqir, and Immanu’el. The rapid growth of these illegal settlements and their aggressive populace, known as the “Ariel finger”, threatens Hares and Kifl Hares on a daily basis. The events of this morning are a part of a larger effort to defeat the Palestinian people of this region.

On 1st and 2nd of May of this year at 10pm the local municipalities of both villages warned their residents of possible settler attacks; that night, however, as villagers stayed awake, the banging on their doors came not from settlers but from the Israeli military who forcefully entered seven homes, destroyed property and arrested six youths.

From March 15th to the 21st 2013, sixteen teens were arrested in several raids in the village of Hares in relation to a car accident on nearby Road 5. Both the boys who have been released and those who remain in prison report being held under inhumane conditions qualifying as torture. Overall, 12 boys from Hares village remain in various Israeli prisons.

Villages of Hares and Kifl Hares resist insult and injury from the “Ariel Finger” on a daily basis. Though the people understand the massive political strategy that manifests in daily violence in their lives, they continue to demand their basic human rights, and to live with their families in peace on the land on which their livelihoods depend on. 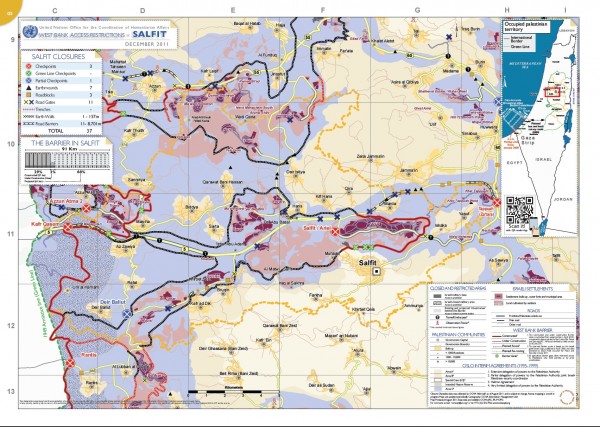 OCHA map of the Salfit region showing the ‘Ariel finger’