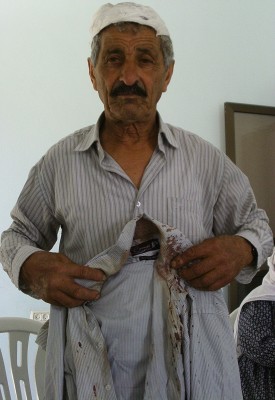 Fouzi, his bandages freshly changed for the day, holds a memento of the day he nearly was killed (photo: ISM)

Two olive farmers from the village of Beit Furik, east of Nablus, are recovering from head wounds in a near-lethal attack by colonial-settlers. Although both survived, they are in need of daily check-ups at a clinic in Nablus and are afraid to return to work on their land.

In the early afternoon of Monday 29th April, Fouzi Mousa Nasasra (65) and Abad al-Rahman Khatatba (50) went to put out fires started by settlers, from the nearby illegal settlement of Itamar, on their land just a brief walk away from their neighbouring homes. The fire service from Nablus also came to help put out the fire. Afterwards the pair took a rest on their land, which sits on a mountainside. Suddenly three settlers came at them in a surprise attack, with fifteen more in support. They hit them both in the head, with sharp farming tools and stones, repeatedly, causing them to collapse. Fortunately, other villagers saw what was happening and ran to help them, so settlers backed a retreat up the mountainside.

When asked about the attack Fouzi spoke of how the settlers were laughing and ‘proud’ of what they were doing. He added that if there were no villagers about to see what happened he would be dead. He spoke of his concern of going back to his land, where he hasn’t returned even though it begins part-way along his road, after what happened and of past attacks in the last 12 years which have claimed two lives, 88 year-old Abu Odie and his own brother, 33 year-old Farrid Nasasra. Now Fouzi has to visit a clinic in the city of Nablus every day to change his dressings, as his wounds bleed all the time. Thankfully, he is expected to make a full recovery, scars aside, and should have the bandages and stitches completely removed in a month.

The attacks and killings are accompanied by the Israeli Occupation Forces forbidding Beit Furik’s farmers from harvesting olives on the mountain. This attack has been one of several in a recent upsurge in violence by settlers, particularly from Yitzar (in Burin, Huwwara, Urif and Asira), Esh Kodesh (in Jalud) and Elon Moreh (in Azmut), over the last week in the Nablus governorate district. 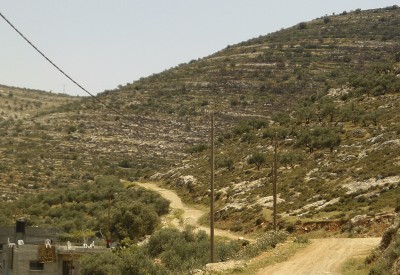 Abad and Fouzi’s land on the mountainside by their houses (photo: ISM) 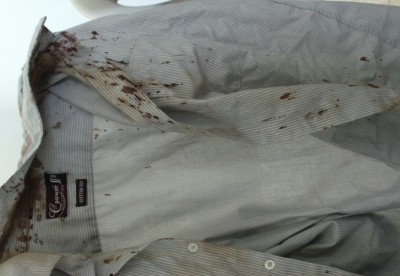 Fouzi’s bloodstained shirt, with further loss of blood he believes he would have died (photo: ISM)