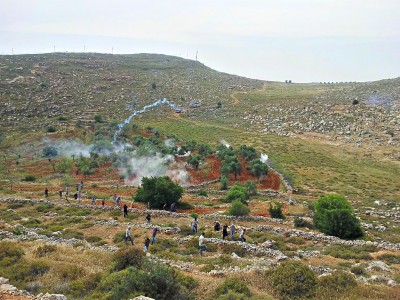 Teargas being shot at demonstrators in Deir Jarir

Around four hundred Palestinians, joined by a handful of international activists, participated in today’s weekly demonstration organised by Silwad and Deir Jarir villages on their lands, upon which settlers from Ofra set up an illegal outpost more than four weeks ago.

Today, at around 12pm, several hundred people from Silwad and Deir Jarir villages gathered on a hilltop facing the new outpost to hold their second weekly protest. As they were waiting for more people to join them, around ten settlers invaded the nearby Palestinian valley and clashes ensued. Israeli forces, already present at the scene, began shooting tear gas canisters at Palestinians.

After the midday prayers were performed on the hilltop those who were gathered started marching towards the new outpost. Israeli soldiers assembled in a line facing the protesters immediately started shooting extensive amounts of tear gas canisters and rubber coated steel bullets at the people.

The march was then dispersed, with several people suffering from tear gas suffocation and requiring assistance from Palestinian Red Crescent personnel. One international activist was also shot with a plastic coated steel bullet. As clashes continued to erupt between Israeli forces and protesters, settlers appeared again at the scene. Palestinian protesters went forward to push the settlers back from their land and were soon met with more tear gas canisters and rubber coated steel bullets fired by Israeli forces.

Confrontations between Palestinians lasted for another hour until the settlers retreated from the scene. The extensive use of tear gas throughout the afternoon led to a number of fires being sparked on the agricultural land that continued burning throughout the clashes.

Yesterday, a jeep driven by settlers drove on to the land broke down a gate and ran over top of 35 olive trees destroying them. Settler attacks often occur in these villages, settlers from nearby Ofra settlement recently raided the village of Deir Jarir, setting fire to ten of the resident’s cars. Earlier in April settlers severely attacked a Silwad villager who used to be a judge, beating him with an iron rod until he lost consciousness. Silwad has seen consistent clashes in recent weeks due to this violence and the establishment of the illegal Nezah Benjamin outpost twenty days ago. 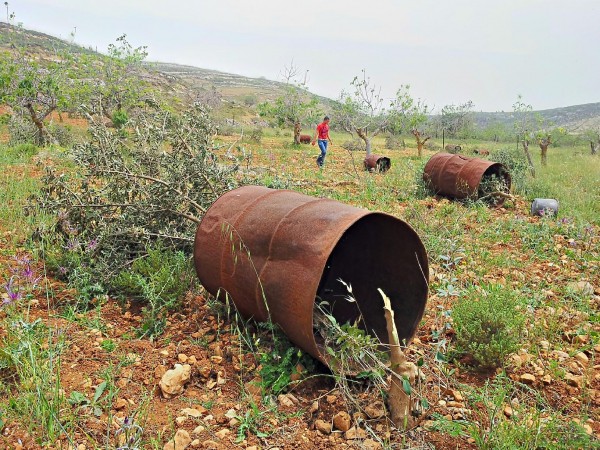 Trees destroyed by settlers on 2nd May 2013

This outpost consist of caravans and huts situated on Palestinian farm land that the residents of Silwad, Deir Jarir, Taybeh and Ein Yabrud have been denied access to for over a decade. A settlement outpost is the first move made by settlers when conducting a land-grab in the West Bank; establishing temporary buildings which are protected by the military and eventually made permanent, in order to establish ‘facts on the ground’ and steal Palestinian land.

This is the second weekly demonstration that the villages of Silwad and Deir Jarir have held together to protests the land theft and settler violence and more demonstrations are expected to be organised in the following weeks.