New
Home / Reports / A life of uncertainty under occupation

A life of uncertainty under occupation

At 3am on 13th May, Nasri Sabarna of Beit Ummar woke up to the sound of Israeli soldiers kicking down his front door. The sound of them shooting tear gas, rubber bullets and sound bombs at people passing his house on their way to the Mosque for morning prayer also woke up his 3 year old granddaughter, whose crying in turn woke up the rest of the Sabarna household. 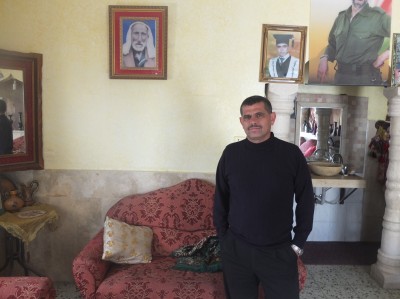 The 6 jeeps full of soldiers had come to arrest his 21 year old son Achmed – for the fifth time. Achmed is a 21 year old student who has yet to be charged with any crime. As Achmed was not home at the time the soldiers invaded his home, the whole family were ordered to go to the police station in the illegal settlement of Gush Etzyon the following morning at 9am. It was here that Achmed was taken into interrogation. Despite not being guilty of committing any crime, his father does not expect to see him anytime soon. Achmed has already been forced to miss two years of university because of similar incidents, which have cost his family alot of money – Achmed was arrested for the first time when he was 13 years old.

His father, Nasri is no stranger to the Israeli culture of injustice practiced against Palestinians. At the age of 13, he himself was arrested by Israeli soldiers without charge and imprisoned for 10 months. His whole life has been shaped by the occupation around him. He remembers seeing Israeli bulldozers demolish three historic homes in his village of Beit Ummar at the age of 10 – such events inspired him to become politically active. In 1978 he established the first student council in Palestine, going on later to become mayor of his home village of Beit Ummar. In Israel’s bid to crush any Palestinian political organisation, Nasri was imprisoned for 6 years between 1988 and 1994 for the sole reason of being a member of the political party Fatah.

Nasri’s main concern now is the effect that Israel’s systematic use of administrative detention, harrassment and abuse will have on the younger generations of Palestinians born under occupation. When he was mayor, 40 soldiers broke into his house and destroyed most of their belongings. They wore balaclavas as they did so and terrified his youngest son Abdullah.

Over the following weeks Abdullah’s teachers told his father that his mood had changed, he had become aggressive, arguementative and unusually violent. Nasri sought the help of psychologists from Medicenes Sans Frontiers who worked with Abdullah regularly. He told the psychologists of times where soldiers had lined him and his classmates up when walking home from school and made them jump over their guns before beating them.

The psychological treatment helped Abdullah, who is now ten, to deal with such issues and his behaviour is now back to normal. But Nasri worries for those hundreds of thousands of Palestinian children who are not so lucky to recieve treatment. A combination of abuse and detentions coupled with the daily destruction of homes, land, resources and opportunities for young people in the West Bank diminishes any hope they may have for the future and ultimately leads them to seek out revenge through violence.

Nasri emphasised that this is not a struggle between religions, nor are different religious groups inherently incapable of coexisting in harmony. Colonialism and Zionism are the driving forces behind the brutality of the occupation and only granting Palestinians their freedom can bring around real peace. To summarise, Nasri said “No nation can just get rid of another nation.”