On 7th April around three kilometres from the Palestinian village of Al Majaz, the Israeli army conducted major training exercise with tanks and automatic weapons, using live ammunition. Al Majaz in the South Hebron Hills is in what the Israeli authorities refer to as ‘Firing Zone 918’, a closed military zone regularly used for training for the Israeli army and eight villages are at risk of eviction and destruction. 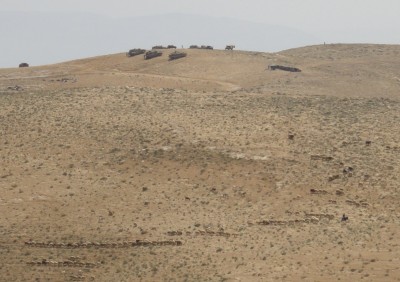 At least eight tanks and several armoured personnel carriers could be heard moving into the area during the night and at around 6am helicopters were seen over the village of Al Majaz. Between 6.30am and 7.30am at least thirty shots were fired from Merkava tanks – each creating a noise loud enough in the village to wake people and to scare birds from the trees. Hundreds of soldiers moved around the tanks and during this hour there was also a large amount of automatic gunfire.

The military troops moved between two hilltops to the east of Al Majaz, repeatedly firing weapons and driving military jeeps around the Palestinian villages of the South Hebron hills throughout the day. As this military exercise was particularly large, the villagers of Al Majaz had received a phone call from the Israeli army to inform them – but for other military training exercises, which occur at least once a week, the villagers state they are not notified.

Village life went on throughout the military exercise and children from Al Majaz had to travel to their school in the village of Al Fakheit several kilometres away. The children travel over the rocky terrain in a Unicef donated jeep which the military have in the past threatened to confiscate, stating that it is not permitted in the area. Upon reaching the school, the children still had to listen to the sound of tank- and gun-fire, easily audible even from their classrooms.

There are twelve villages in Firing Zone 918, all of which have been threatened in the past with eviction and demolition in order to make way for a huge Israeli military training area, free of Palestinian villages. Eight remain under threat, with a temporary injunction by the Israeli Supreme Court having recently been extended in January 2013. The headmaster of the school in Al Fakheet said “The Israeli authorities know it is illegal to evict people for military training, so they will try to make people’s lives very bad so they just leave. Then if we leave, they will use the land for settlements.”

The Israeli forces have stated that they wish to create a general military training area in Firing Zone 918. This would be a breach of the 4th Geneva Convention, which states that an occupying force should not destroy property unless it is “rendered absolutely necessary by military operations” – general military training is not deemed “absolutely necessary” in international law.