New
Home / Features / In memory of Tom Hurndall, shot in the head by Israeli sniper 10 years ago today

In memory of Tom Hurndall, shot in the head by Israeli sniper 10 years ago today 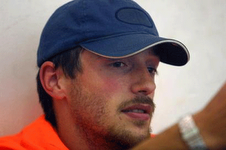 Tom shortly before he was shot

The International Solidarity Movement today remember Tom Hurndall, ISM volunteer who 10 years ago on 11th April 2003 was shot in the head by an Israeli sniper.

The Israeli army were invading the city of Rafah, in the Gaza Strip when Tom and other ISM volunteers saw a group of children in a street where snipers were firing. Witnesses say that bullets were shot around the children, who were paralysed by fear and unable to move – Tom pulled one child to safety, but as he was returning for a second, he was shot in the head by a sniper.

He went into a coma and died nine months later on 13th January 2004. He was 22 years old. Today, on the day he was shot, we pay tribute to Tom’s bravery. Our thoughts are with his family and friends. We continue to stand in solidarity with the Palestinian people, as we think Tom would have wished.

“What do I want from this life? What makes you happy is not enough. All the things that satisfy our instincts only satisfy the animal in us. I want to be proud of myself. I want more. I want to look up to myself and when I die, I want to smile because of the things I have done, not cry for the things I haven’t done.” – Tom Hurndall